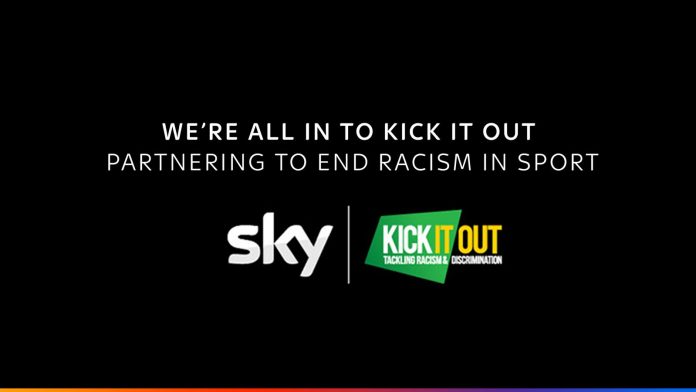 The anti-racism group Kick It Out has formed a formed three-year partnership with Sky in an effort to bolster diversity and inclusion in football.

Kick It Out has launched a three-year partnership with Sky — which positions the company as its key broadcast media partner in the drive for inclusion in football and the battle against discrimination in all its forms.

Sky will commit £3m over the next three years, in a mix of cash and value in kind support.

The organisation said it will also commit to using its “powerful voice, extensive reach and established channels” to support Kick It Out, who has has been at the forefront of the fight against racism and discrimination in football for over 27 years.

As well as committing to use its editorial reach, voice and platforms to campaign for change, Sky will work on a series of initiatives with Kick It Out.

These will include partnering on educational initiatives, making it easier to report instances of discrimination online and inside football stadia, and developing annual transparency and insight reports on a range of issues relating to diversity, discrimination and inclusion.

Sky Sports recently partnered with Kick It Out on their #takeastand initiative which launched during England’s match against Belgium at Wembley in October, and was a proud supporter in 2018 when Kick It Out celebrated 25 years of tackling discrimination.

Kick It Out chair Sanjay Bhandari said: “We are absolutely delighted to have Sky onboard as the first new strategic partner, as part of our new vision to be a galvanising hub for inclusive change in football.

“We share the same ambition to bring football together and make it a game where everyone feels that they belong. This is an enormously exciting partnership. We look forward to working together to deliver real change in the game we all love.”

A statement from the Premier League said: “The Premier League is unequivocal in its belief that there is no room for racism in football or society and we stand alongside players, our clubs, partners and all those who come together to reject racism.

“We have longstanding and valued partnerships with both Kick It Out and Sky and are pleased to see this is another example of football uniting to show discrimination will not be tolerated in our sport. We will all continue our wide-ranging work to promote equality and celebrate diversity in football and wider communities.”