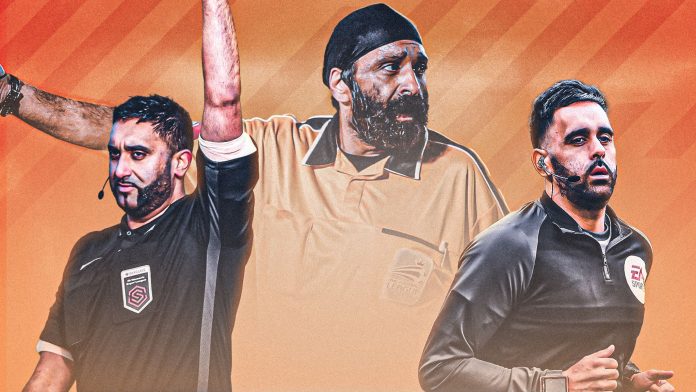 Brothers Bhups and Sunny Singh Gill will make English Football League history this weekend, when they become the first pair of British Sikhs to officiate, in the same Championship match.

Bhups and Sunny, sons of the first turbaned Sikh to referee in the English Football League, Jarnail Singh, will be part of the officiating quartet for Saturday’s game between Bristol City and Nottingham Forest, Sky Sports reports.

Professional Game Match Officials Limited (PGMOL) – the body responsible for appointing match officials across the EFL – have confirmed Bhups as one of two assistant referees for the Sky Bet Championship clash at Ashton Gate, with Sunny named fourth official.

The match takes place on 10 April, ahead of Vaisakhi next week — the religious Sikh New Year festival and one of the most important dates in the Sikh calendar with celebrations taking place across the globe by the faith.

They have both officiated in the Championship this season but have so far yet to be part of the same game in the division – thus will make EFL history.

Shadow Secretary of State for International Development, Preet Kaur Gill, who is Britain’s first Sikh female Member of Parliament was delighted by the announcement.

Speaking from St Andrew’s, the Birmingham Edgbaston MP, highlighted the pivotal part played by the brothers’ father in helping them reach this juncture in their sporting careers.

“I think it’s [going to be] wonderful to see the two brothers refereeing and the likelihood of them refereeing a Championship game is brilliant,” the Shadow International Development Secretary told Sky Sports News.

“But of course, they saw their father Jarnail Singh, a referee, and they clearly needed to see someone who inspired them because how else would they see a pathway into their chosen career choice?

“I think what Bhups and his brother are doing is really going to inspire others to think, actually ‘I can do refereeing, I can get the support, and I can transition into the [pathway to the] Premier League’. We do need to see more of that.

“And I think ahead of Vaisakhi – which Sikhs will be celebrating – to see this game and to see two Sikhs refereeing will be absolutely something the Sikh community here in Britain can be really, really proud of.”