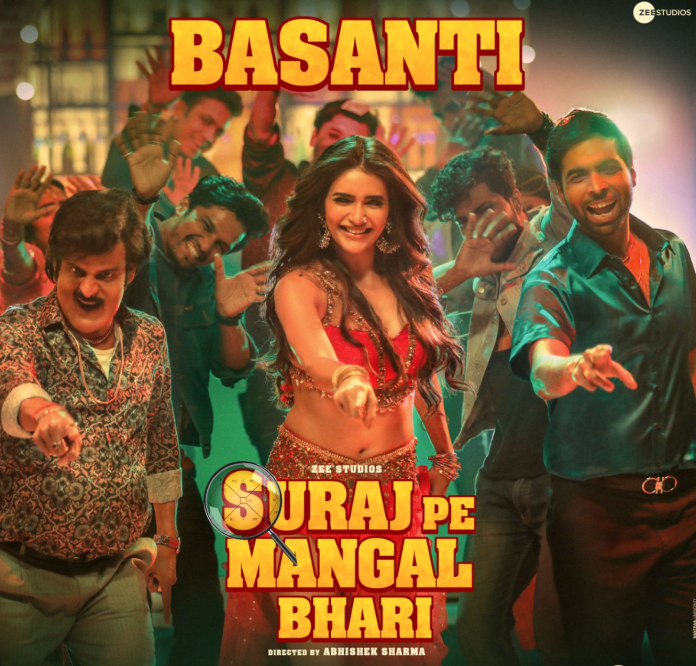 One of the ‘grooviest’ tracks of the year Basanti, which features in Diljit Dosanjh’s upcoming Diwali film Suraj Pe Mangal Bhari, has officially released.

The music of Basanti is composed by Javed – Mohsin and is performed by singers Payal Dev and Danish Sabri. The lyrics are penned by Danish Sabri and stars Karishma Tanna together with an unrecognisable Manoj Bajpayee.

Taking to Twitter, Zee Music Company promoted the Basanti video ahead of its official release early this morning with the caption: “Hold on to your dancing shoes, and get ready to listen to the grooviest track of the year! #Basanti Song out today! #SurajPeMangalBhari”

The track is available to stream now and you can watch the official music video right here 👇🏽👇🏽👇🏽.

Suraj Pe Mangal Bhari stars Diljit Dosanjh, Manoj Bajpayee and Fatima Sana Shaikh. It is directed by Abhishek Sharma and distributed by Zee Studios. The story is set in the 1990s – where a wedding detective has to perform background checks on prospective grooms. In the time before social media and mobile phones, everything has to be done in person.

Check out the trailer here 👇🏽.

Hold on to your seats… Suraj Pe Mangal Bhari is releasing this Diwali on 14 November.