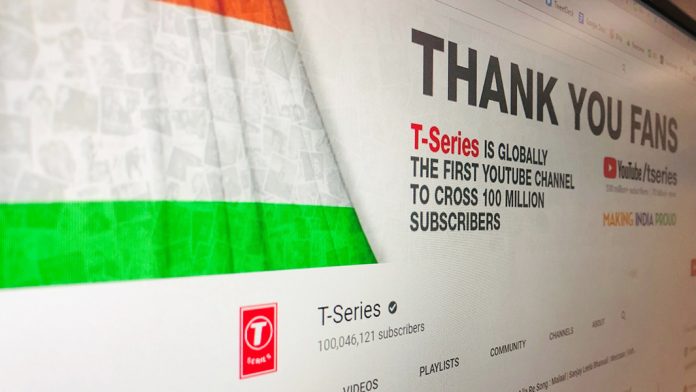 The achievement was highlighted this week and fans of the channel including a lot of A list Bollywood stars took to their social media to congratulate the company. T-Series specialises in sharing movie trailers and Bollywood songs. They are also home to the most viewed video – Guru Randhawa: Lahore.

They uploaded their first video in December 2010 and now have amassed over 70+ billion views on their videos.

The company took tweeted: ‘World’s biggest YouTube Channel, T-Series has achieved another YouTube milestone by being the first one to cross an astonishing #100MillionSubscribers.’

World’s biggest YouTube Channel, T-Series has achieved another YouTube milestone by being the first one to cross an astonishing #100MillionSubscribers.
Thank you for being part of our journey. T-Series – Making India Proud. 🇮🇳@itsBhushanKumar #bharatwinsyoutube pic.twitter.com/s5Haz0bBT4

Last year, the Indian platform were competing with fellow YouTuber PewDiePie, real name Felix Kjellberg, whilst they battled to have the most subscribers.

He eventually admitted defeated after the suspected shooter of the Christchurch shooter said: ‘Subscribe to PewDiePie’ in the live stream of the massacre.

The YouTube released the following statement: ‘I think it’s time to end the Subscribe to PewDiePie movement, or meme. It’s something that started off as a way to keep me as the number one most subscribed channel on YouTube, and seeing so many people come to my support, other creators as well, it’s been incredibly humbling to me. It really, really meant a lot.

‘At first, it started off with people doing really positive and fun things to get attention, through Subscribe to PewDiePie. But when you have 90 million people riled up about something, you’re bound to get a few degenerates.’

‘Out of the respect for the families and victims involved, I chose not to address it further than on Twitter, where I disavowed the actions taken that day and gave my sincerest condolences to everyone affected.

‘To have my name associated with something so unspeakably vile has affected me in more ways that I might have shown. I didn’t want to address it right away, I didn’t want to give the terrorist more attention, I didn’t want to make it about me, because I don’t think it has anything to do with me. To put it plainly, I didn’t want hate to win. But it’s clear to me know, the Subscribe to PewDiePie movement should have ended then.’