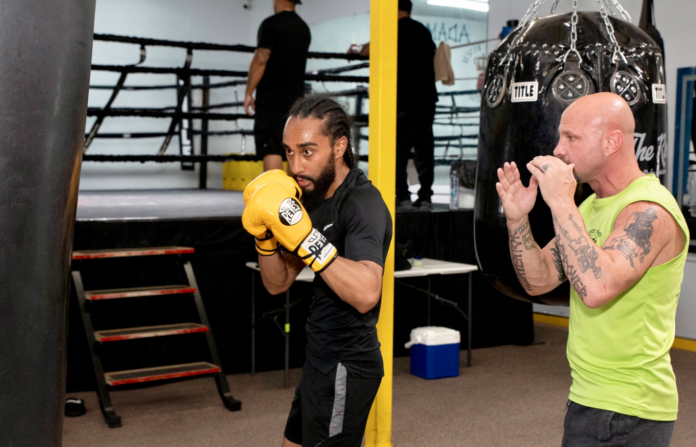 Amir Khan’s new protégé, Tal Singh has teamed up with American trainer Clarence ‘Bones’ Adams, who says the exciting prospect will “shock everybody”.

Khan is managing the career of Singh, an England amateur champion, who is preparing for his professional debut later this year.

But Singh has firstly headed to Las Vegas to work with respected coach Clarence ‘Bones’ Adams, following in the footsteps of Khan, who too refined his skills by training in America.

‘Bones’ Adams told Sky Sports: “Amir text me and we talked a little bit. I said, ‘Just go ahead and bring him over.’

“He’s got power for his weight division, but it’s just getting it out of him and making sure that the speed and the power go together. I’m really impressed with his power.

“I threw him right in there to spar on the first day, to see what he’s got. I didn’t tell him it was a two-time Olympian, a silver medallist and an undefeated professional at 115lbs. It was quite a surprise for him, but it also let him know where he was at, where I’m at.

Taking to social media on Wednesday (1 Sep), Singh shared a few snaps of his first training session in Las Vegas with new coach, ‘Bones’ Adams. And thanked his manager, Khan for coordinating the “best” team around him.

Training camp has officially commenced here in Las Vegas where I will be based from now onwards working with my new coach Bones Adams at the world famous Prince Ranch boxing gym!
Thank you to my manager @amirkingkhan for assembling the best team around me! pic.twitter.com/dRp5SFhjSp

“I already knew he had talent, or Amir wouldn’t have been calling me. It’s just getting it out of him is the thing,” ‘Bones’ Adams added.

Singh said he “relished the opportunity to sharpen his skills” in America with ‘Bones’ Adams, a former WBA super-bantamweight champion who has since become a respected trainer.

“I was open to it completely because it’s [Las Vegas] the boxing capital of the world,” said Singh, who is Khan’s first signing.

“The fighters over there in the States, it’s a style that suits me perfectly.

“He [Khan] wanted to put me with one of the best trainers in the world and a future Hall-of-Famer in ‘Bones’ Adams.

“Now that we’re working together and I’ve been here, I’m learning every day and it’s a great thing.

“I thought that he’s a tremendous coach. In my opinion, he’s a great teacher, and there’s not many teachers in boxing nowadays.”

Singh has set himself the target of becoming the first Sikh world champion.

‘Bones’ Adams has backed Singh to achieve this long-term ambition, but firstly intends to maximise his fighter’s stamina and strength before an entry to the pro ranks.