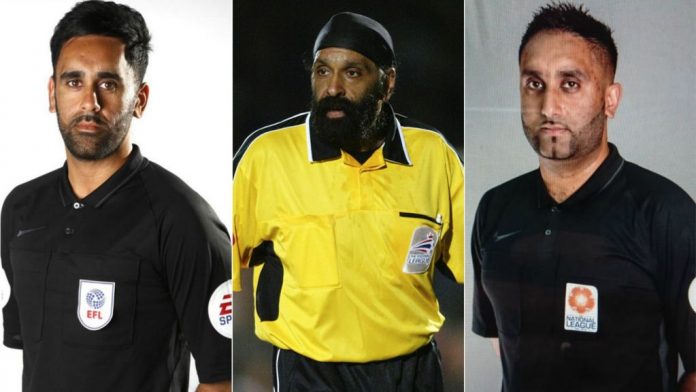 When Jarnail Singh was a professional referee he would take his teenage sons – Sunny and Bhupinder – to run the line for him at summer charity tournaments for Asian teams.

Singh became the first Asian referee in the EFL when he took charge of a League Two match in August 2004 – going on to referee more than 150 games in Leagues One, Two and the Championship before retiring in 2010.

Singh has previously said he was “representing a wider community” by being “the first Sikh with a turban and a beard” officiating at that level.

And at the same time he was helping his boys to follow in his footsteps.

However, having started refereeing as teenagers, the brothers soon gave it up because of the verbal abuse they suffered.

“I didn’t like the intimidation from the Sunday league teams at the time,” says Sunny Gill. “I was only 17. If I’m honest, a few times I wanted to start a fight, and that’s the truth. It wasn’t worth it.” 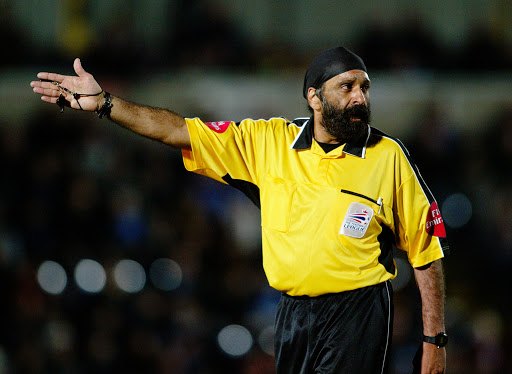 Bhupinder Gill, or Bhups, was 16 and taking charge of under-11 and 12 games. But he got fed up of the grief he would get from parents.

However, in their mid-twenties and with more life experience and man-management skills, they were drawn back to refereeing.

Prison officer Sunny, 36, is now the highest-ranked Asian referee with the Professional Game Match Officials Limited (PGMOL) – the body responsible for refereeing appointments in English leagues. He officiates at National League Premier level, while 35-year-old PE teacher Bhups is an assistant referee in the EFL.

But they are a rarity – PGMOL match officials from a black, Asian and minority ethnic (BAME) background.

The pair are now determined to reach the Premier League and help pave the way for more much-needed diversity among officials at the professional level.

“I’ve said it so many times before that if my dad wasn’t a referee I wouldn’t have thought twice about becoming an official,” says Bhups.

“So how are other people from the same background supposed to even think about wanting to become an official?”

Sunny adds: “If we can get out there and be approachable for young referees from a BAME background who want to speak to us and be mentored or even given the right pathway to follow, it is only a good thing. We can direct them the right way.”

The Football Association says that, as of November 2019, nearly 2,000 (9.4%) of registered referees in England were from BAME backgrounds and that, while the figure “surpasses the target set”, it will “continue to focus on further increasing diversity across football”.

Jarnail is 58 and retired in 2010. He is now a referee assessor in the EFL and keen to work with the FA to increase the number of BAME people working in the sport.

“There is a lack of representation at the top, and that includes the Football Association, where we do need a greater number of BAME individuals being asked about their opinion and involved in working for them,” he says.

“Sometimes talking doesn’t achieve anything. It’s actually taking action. The ball is in the court of the hierarchy to see how they can improve the situation.”

“I personally came across only one occasion when that kind of language was used,” says Jarnail. “A remark was made about the colour of my skin and where I came from.

“I couldn’t pinpoint which one of two players it was, so I just pulled two players over and said ‘has one of you got the courage to repeat what you have just said?'”

Bhups adds: “I think I have only received it once as well. That was from a fan when I was running the line.

“It was the first time I’d ever received abuse and I didn’t know what to do, so I just turned around and gave some verbals back, which I shouldn’t have.

“Now, running the line on Football League games, depending on the stadiums that you go to, you’re literally yards away from fans and you can hear the abuse, but you have just got to learn to ignore it.”

Sunny believes his job as a prison officer has helped him as he has made his way up the refereeing ladder.

“The decisions you make in a prison, you’ve got prisoners facing up to you, challenging you,” he says.

“But, because I can deal with the prison environment, it makes it easier for me to go and then manage 22 players on a football pitch.”

‘He needs to lose some more weight and get fitter’
While Sunny and Bhups have designated coaches to guide them in their careers, their father does not hold back on advice about what they need to do to make it to the Premier League.

“I’ve told Sunny already what he needs to do for next year – lose some more weight and get fitter,” says Jarnail.

“In my opinion, he can manage anybody with the work that he’s done and his life experiences. But he has to build on his movement, positioning and fitness because that to me is the key.”

Sunny adds: “I remember a picture of when I did my first National League game with Bhups – you should see the picture and how heavy I was.

“Compare it to now and you can see how far we’ve come.”

So can the sons go one step further than their father and reach the Premier League?

“My next promotion will be Football League referee,” says Sunny. “And then you also become a fourth official in the Premier League.

“To me, I’m one step away from my goal which I set when I first started refereeing. I know what I need to do to get to that next step. I’ve got a few things I need to fix and I’m sure I’ll do it.”