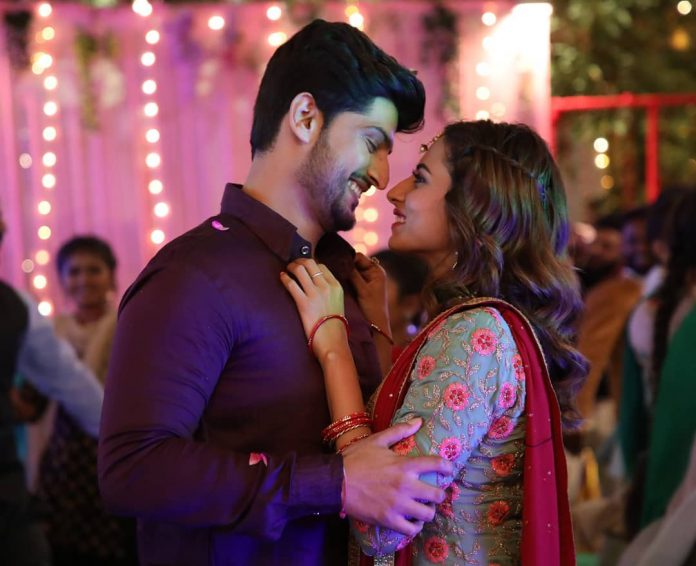 The makers behind the upcoming Punjabi flick ‘Surkhi Bindi’ have released the highly anticipated trailer.

Only earlier this month, the makers released the official first look at the movie via the poster, which was then followed that up with the first track ‘Karmawala’. It created a buzz amongst the audience, as we see the ‘Diamond’ singer Gurnam Bhullar romancing Punjabi actress Sargun Mehta.

We’ve already seen a lot of behind the scenes footage through Gurnam and Sargun’s snapchat stories. We’ve seen the loving friendship these two have, and now they’re set to win audiences hearts over with their on-screen relationship.

The trailer opens with Gurnam and Sargun getting married, however Sargun’s character isn’t happy with this marriage. Eventually, she starts to open up to her husband and discusses her dreams about visiting Canada.

The reassuring husband Gurnam promises he’ll do everything he can do to help her dream come true. It will be interesting to see how the story will pan out, and it will definitely have audiences hooked.

‘Surkhi Bindi’ has been directed by ‘Qismat’ and ‘Shadaa’ hitmakers Jagdeep Sidhu, and has Gurnam Bhullar and Sargun Mehta in leading roles.

Talking about the flick, Sargun said: Surkhi bindi is about dreams. Dreams that don’t only need courage and will but also someone who would be your strength in good times and bad. it is a love story with a new and unique perspective. How far would you go to fulfil the dreams of someone you love?”

Leading actor Gurnam added: “Love is not about just care or affection. But the support and understanding that is the foundation of any relationship.

Surkhi Bindi is all about that emotional support. This concept and story will definitely make everyone fall in love with this one.”

The movie will be hitting cinema screens around the world on 30th August 2019.