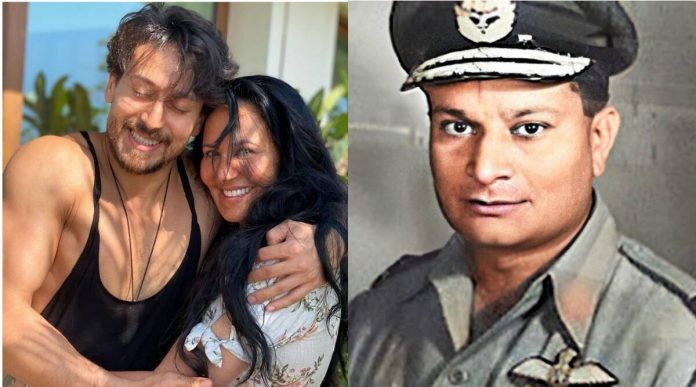 Sharing the pictures on her Instagram handle, Shroff wrote, “Tiger’s grandfather training to fly Tiger Moths. I guess he was around 18 or 19 years old when he fought in World War 2. True grit and true valour. Decorated for his bravery by his India. I’m proud to be his daughter. Jai Hind🙏🏻.”

In the black and white photos, Ayesha Shroff’s father Ranjan Dutt is seen with his fellow fighter pilots.

As soon as Shroff shared the pictures, many friends from the film fraternity and fans flooded the comments section of the post with messages. While Salil Acharya wrote, “Wowwww,” Ahmed Khan’s wife Shairaa commented, “RESPECT ✊ ♥️.” “It’s in The Blood Ma’am. Warrior Mindset 🔥,” read a fan comment.

A couple of weeks ago, Ayesha Shroff had remembered her father and shared his picture on Instagram. She captioned the photo, “Remembering my dad on this day🙏🏻❤️ I guess I definitely inherited some of his guts!!🙏🏻🙏🏻🙏🏻❤️ @apnabhidu @tigerjackieshroff @kishushroff.”

Tiger Shroff had earlier mentioned that he is proud of his roots when he appeared on Arbaaz Khan’s celebrity talk show Pinch. He had said, “My dad’s (Jacky Shroff) dad is Gujarati, and my dad’s mom is Turkmenistani, a Mongolian-Chinese, a Muslim. My mom’s mom is French, and mom’s dad is Bengali, so I’m a mix of a lot of things, I don’t know what that makes me.”

On the work front, Tiger will be seen next in Vikas Bahl’s Ganpath. The film is scheduled to release in theatres on December 23.