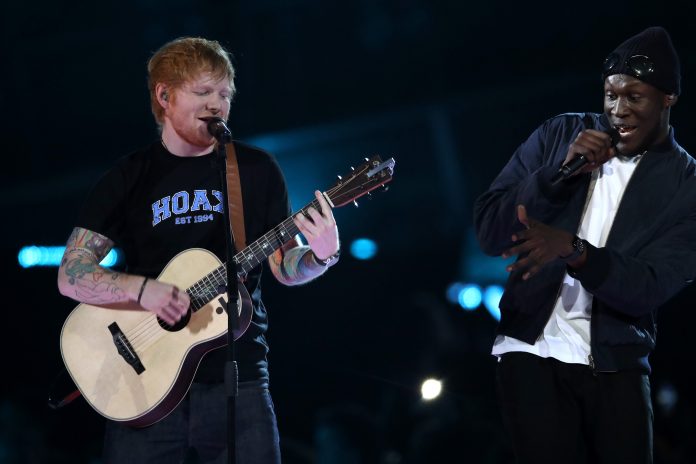 The Brits took place last night and featured some memorable moments from both the performers and winners. Here’s a rundown of 10 of the most unforgettable moments.

The most talked about performance of the evening was by Ed Sheeran who performed a rendition of his newest single ‘Castle on the hill’. Ed also performed ‘Shape of You’, during his set he was joined by Stormzy who rapped alongside him. The collaboration was a surprise to viewers and became one of the highlights of the night.

Katy Perry was also on stage to perform her new release ‘Chained to the Rhythm’. Her performance included dancers dressed as houses and large skeleton puppets dressed as political figures. Viewers were quick to notice the moment one of the ‘house-dancers’ fell off the stage and the clip has been circulating the internet ever since.

Comedian Romesh Ranganathan made a reference to last year’s ethnic diversity controversy by commenting: “Maisie’s here because she’s a star, and I’m here because they heard I listen to grime and they’re trying to over compensate for last year.” He went on to present the award for Best Group alongside Game of Thrones star Maisie Williams.

Grime artist Skepta wowed the audience with his performance of ‘Shutdown’. The set was powerful but controversially a lot of his lyrics were muted despite it being well past the 9pm watershed. Skepta’s performance was heavily censored leaving some to joke that it was reduced to a ‘dance performance’.

The late David Bowie was awarded in two categories last night, one for Best Male and the other for the highly coveted Best British Album. His son Duncan Jones picked up the award on his behalf and commented on the star’s long-living legacy.

Winners of Best Group The 1975 took to the stage to perform one of their biggest singles ‘The Sound’. During the song graphics flashed on the screen that read messages such as ‘Is this a joke?’ and ‘They’re essentially making robotic Huey Lewis tunes’. Many viewers believed that ITV had been hacked with the perpetrator mocking the band but that was far from the truth as the graphics were planned and part of the band’s music video for the single.

7 – Coldplay collaborating with The Chainsmokers.

The Chainsmokers and Coldplay collaborated for a surprise performance of their new single ‘Something Just Like This’. They joined forces on a colourful and exciting stage to debut their new upbeat track.

Little Mix took home the award for Best Single and when it came to their speech the girls thanked their exes for making their win possible. The girl group’s song ‘Shoutout to my Ex’ beat Zayn’s ‘Pillowtalk’ making the win and speech even more scandalous.

9 – The moving tribute to George Michael.

2016 marked a tragic year in which we lost a lot of musical greats, The Brits paid tribute to George Michael who sadly passed award on Christmas Day last year. His former band mate Andrew Ridgeley along with Pepsi and Shirlie made a moving speech that received high praise.

Singing sensation Adele won the award for Global Success and despite being in Australia left the audience a video message thanking her fans. Adele is well known for her appearances at the Brits so it was only fitting that she make an appearance even if it was via video screen.

What was your favourite moment? Let us know. #BritAsia TV