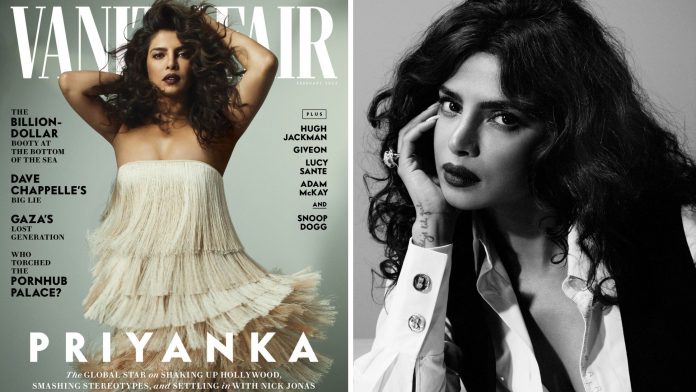 In Vanity Fair’s February issue, Priyanka Chopra reflects on her storied Hindi film industry career, marriage, and creating a path for herself in Hollywood.

Priyanka Chopra, 39, is treating fans to a tell-all interview as she adorns the cover of Vanity Fair’s upcoming issue.

Chopra looks ethereal and bold on the cover — dressed in a strapless white cocktail gown with 1920s-style fringe designed by Fendi.

The global icon spoke to writer Rebecca Ford for the magazine’s February issue where she talks about shaking up Hollywood, smashing stereotypes and settling in with Nick Jonas.

On Twitter, Vanity Fair announced their next cover star and shared a picture of the upcoming issue.

After a journey into The Matrix, the actor enters 2022 with her cup overflowing—reflecting on her storied Hindi film industry career, marriage, and creating a path for herself in Hollywood.

The publication proceeded to tweet a thread of tasters from the interview following the cover, explaining after becoming one of India’s biggest movie stars, “@PriyankaChopra left home at the peak of her career and created, step-by-step, a position for herself in Hollywood that’s reaching new heights.”

Highlights from the magazine excerpts also reveal it’s taken a lot of “pavement pounding” for Chopra to get people’s attention and that she had to play parts which were “more American” to get a seat at the table.

Since establishing her career in Hollywood with roles in 'Quantico,' 'Baywatch,' 'The Matrix Resurrections,' and more, @PriyankaChopra’s process for selecting roles has evolved.

Fast forwarding to the film front, the star is developing Sheela for Amazon, in which she’ll play Ma Anand Sheela, the spiritual adviser made famous in the Wild Wild Country documentary for her part in the 1984 Rajneeshee bioterror attack in Oregon.

She will also return to India to film her first Hindi project in a number of years, a road movie centred on three women — which will also star two other Bollywood actors, Katrina Kaif and Alia Bhatt.

As the interview comes to a close, Chopra is confident 2022 is going to bring change: “I feel like I am at a precipice of reinvention,” she says. “What is the new me? I’m very excited about the future. I’m terrified of it too. Change is always scary. But I’ve done it multiple times in my life.”