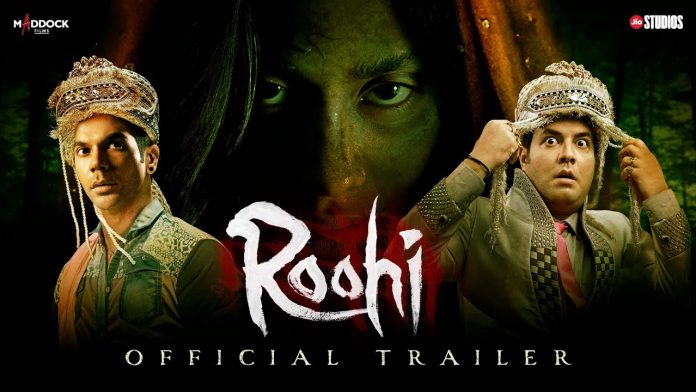 Jahnvi Kapoor transforms into Roohi in the recently released movie trailer of the same name.

Indian actor Janhvi Kapoor is set to feature with co-stars Rajkummar Rao and Varun Sharma in her next film, titled Roohi.

The movie is directed by Hardik Singh and produced by Dinesh Vijan and Mrighdeep Singh Lamba, presented by Jio Studios. Jahnvi debuted opposite Ishaan Khattar in Dhadak, then starred in Gunjan Saxena: The Kargil Girl  and this new character is one to further showcase her versatility.

Roohi is set in a fictional town of North India. The film centres on two small-town boys Bhaura and Kattanni who are stuck in a forest with Roohi. But there’s an insidious spirit following them with feet turned backwards. What will happen next?

Fans have reacted with keen curiosity from the trailer and have praised Janhvi’s ghostly bride act. One social media user posted, “She can do masala films and gain popularity with hit songs but she’s doing meaningful and performance oriented role and each film is different from each other! An Absolute Risk Tasker! #JanhviKapoor #Roohi”. Another wrote,”Like stree…combination of horror & humour #RoohiTrailer #Roohi @RajkummarRao #JanhviKapoor.”

On Twitter, producer Boney Kapoor shared the trailer and expressed his enthusiasm for the trio working together. He tweeted: “Janu, you are blessed to be working with such talented Actors #RajkumarRao #VarunSharma. The 3 of you bring alive the fearful comedy. #RoohiTrailer“

Janu, you are blessed to be working with such talented Actors #RajkumarRao #VarunSharma. The 3 of you bring alive the fearful comedy. #RoohiTrailer https://t.co/XP4mTeQdiO

Roohi is set to be the first major Bollywood film to release in Indian cinemas post 100% occupancy, releasing on 11th March 2021.