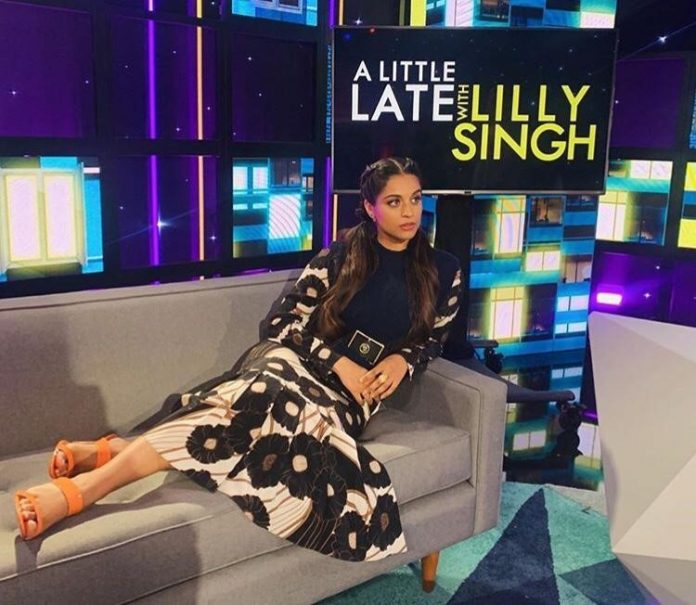 Tonight, Indian Canadian YouTube sensation Lily Singh will make her TV hosting debut with the premier of her new late-night talk show, ‘A Little Late with Lilly Singh’ on NBC.

Lilly is the first Indian woman to host her own late-night talk show on a mainstream TV channel.

Speaking to Entertainment weekly back in March about her prime-time spot as an Indian woman, Lilly naturally cracked a joke: “An Indian-Canadian woman with her own late-night show? Now that is a dream come true,” she remarked. “I’m thrilled to bring it to life on NBC, and I hope my parents consider this to be as exciting as a grandchild.”

South Asian actress, Mindy Kaling, best known for ‘The Mindy Project’ will be the first guest to appear on the show.

Speaking about Lilly hosting her own show she said: “Of course I love that she’s Indian and that her parents have been so supportive of that. That is something that is great for our community to see. She’s amazing. She’s going to do great.”

Lilly isn’t going too far from her roots as her 14.9 million subscribers will be able to watch the show live stream on her YouTube channel 3 hours before its premier on TV, where she will be interacting with fans, commenting in the live stream.

Yup, that’s right #TeamSuper! 🙌 Tomorrow we are live-streaming the #LateWithLilly premiere on our YouTube channel! 🤩💻✨ It’s all goin’ down at 10pm EST on https://t.co/241W8W09FB.

P.S. @Lilly will be commenting in the livestream chat…so you def don’t wanna miss it! 😉 pic.twitter.com/GcJM2qUz3h

If her videos are anything to go by, we know Lilly is going to be an amazing host and we can’t wait to see her rise to the top!

A little late with Lilly will premier tonight on NBC and will be available to watch via Lily’s YouTube channel at 10pm EST (3am GMT) and will premier on NBC at 1.35am EST (6.35am GMT).