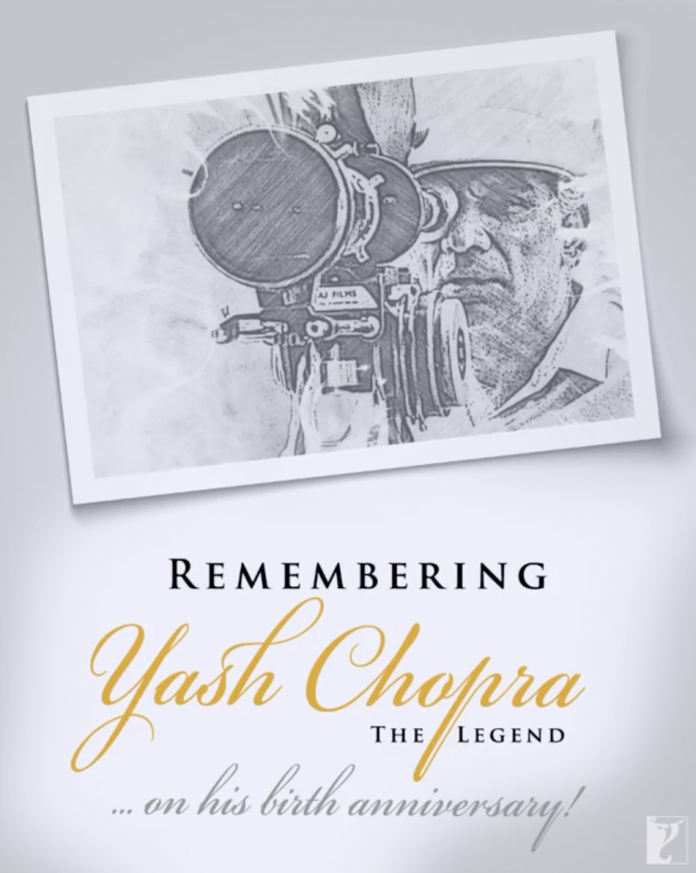 Affectionately cited as the ‘King of Romance’, the legendary filmmaker and visionary, Yash Raj Chopra is being commemorated for five decades of service in Indian cinema.

Yash Raj Films, together with son and head of the studio Aditya Chopra, capitalised on what would have been the director’s 88th Birthday, to announce a global celebration for Chopra’s milestone in moviemaking.

On Instagram, YRF posted a mono-chromed commemorative collage in remembrance of the Bollywood dream merchant with the following caption:

“His cinematic brilliance is an inspiration for generations to come. His storytelling was passionate & all heart. Remembering the celebrated legend #YashChopra on his 88th birth anniversary.”

Take a look some of his on-set moments captured with generations of actors:

The studio also posted a heartfelt note penned by Aditya Chopra that captured the essence of Yash Raj Films and gratitude for fans and followers of their moviemaking craft.

You can read the statement here:

50 years of celebrating movies, 50 years of entertaining you. On this occasion #AdityaChopra pens down a heartfelt note. #YRF50

On Twitter, YRF posted an incandescent sequence of clips that captured the studio’s most iconic and memorable moments in movie history.

5 decades of capturing your hearts… and we have only just begun. Reserve your seats as we promise to entertain you for the next 50. #YRF50 pic.twitter.com/pDcP3ckHDK

While we await further announcements from the production house on the global celebration, DNA India shared their knowledge of what YRF plan to execute throughout 2021.

Quoting a source close to the development, DNA India said:

“Aditya Chopra is keeping all cards close to his chest when it comes to YRF Project 50. YRF turning 50 is a grand occasion for the Indian film industry and Adi wants to make the celebrations touch Hindi cinema lovers across the world.

“YRF Project 50 will be celebrated across all major countries where Hindi films currently release. So, the grand celebrations will happen in the US, UK, Australia & New Zealand, Middle East, Canada, Singapore, Malaysia, France, Germany, Russia, Switzerland, which became synonymous to romance in India due to Yash Chopra shooting so many of his iconic films in this beautiful country, among other key countries.”

“These are big plans that will evoke a lot of nostalgia around brand YRF and its movies. It will show how the legacy brand has shaped pop culture across generations. It will be executed on a big scale and thus mapping out how coronavirus pans out in the world is key to rolling out this global celebration plan. We expect Adi to announce this plan early 2021 as one hopes a vaccine will turn things around for people across the world and the mood to celebrate kicks in again.”

It is undeniable Yash Chopra and YRF helped redefined romance on the silver screen and there are many moments that have left an indelible mark in our memories. We can only wait with bated breath to see what another 50 years of moviemaking means for Indian cinema and for our hearts.