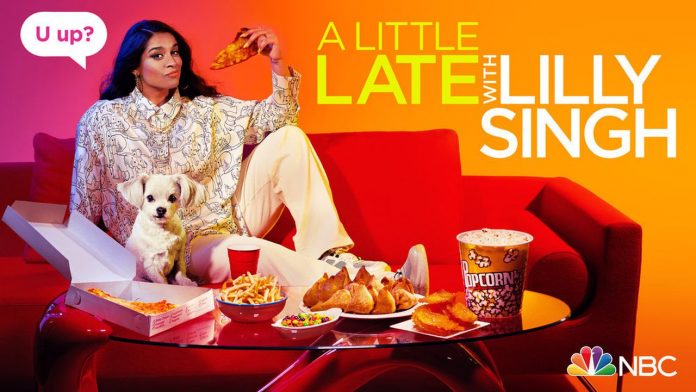 NBC’s late night talk show A Little Late With Lilly Singh is coming to an end with its second season.

A Little Late with Lilly Singh, which launched in September 2019 and replaced Last Call with Carson Daly has reached its terminus after two years.

Singh has however since signed a first-look deal with Universal Television Alternative Studio (UTAS) a division of Universal Studio Group, to develop unscripted projects. She also heads Unicorn Island Productions, and intends to focus on projects under that banner. The first-look deal will see her developing unscripted projects with the unscripted division of Universal Studio Group, which is run by President Toby Gorman, who called her a “creative visionary”.

The YouTube comedian has since signed a deal with Netflix for a comedy series that she is developing with Kenya Barris. The only details she disclosed about the project is that it is being produced by Barris’ Khalabo Ink Society with writers/executive producers Nell Scovell and Diya Mishra. Singh will also produce alongside Polly Auritt of Unicorn Island Productions.

Singh took to Instagram to announce the show would be coming to an end writing, “Two years ago, I embarked on the wild journey of late night TV. I knew this show was about more than me, and I will be forever grateful for the opportunity and support. Today, I write to you from a similar place of deep gratitude to share some news,” she said.

“I’m going to focus on the slate of projects my company Unicorn Island Productions is developing, and we’re saying goodbye to A Little Late with Lilly Singh. I have a desire to make longer form content telling underrepresented stories, which is difficult to execute on a nightly show.”

“This is just the beginning; I can’t wait to share more with you but this is all I can tease for now. I’m beyond grateful for your support past, present and future,” she added. “And to the Late with Lilly crew, I’m so proud of the progress we made in diversifying late night. We’ve given 21 people their late night debut this season. That’s pretty incredible and it’s been a true honour.”

A Little Late airs weeknights at 1:35 a.m., following Tonight with Jimmy Fallon and Late Night with Seth Meyers. NBC did not immediately announce whether another program would replace Singh’s, but the network is believed to be considering options other than talk shows.