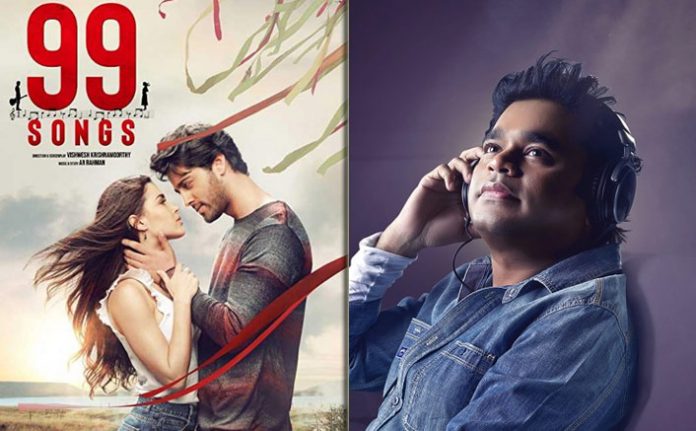 99 Songs is an upcoming Indian multi-lingual musical romance film directed by Vishwesh Krishnamoorthy, and co-written and produced by A. R. Rahman, which doubles as his debut in both roles and has composed the film’s original score and songs.

The film is a romantic musical which will also introduce new talents, Ehan Bhat and Edilsy Vargas. The movie follows the journey of a young man named Jay, whose life centres on his two greatest loves: music and his girlfriend Sophie.

In a statement, Rahman said: “The new generation of musicians has boundless talent. We need to nurture these artists. There’s a new surge of energy coming in many fields; we’re discovering different talents and it’s a beautiful blessing.

“I think music is something that comes from within yourself, within your soul and you feel a sense of validation within yourself when things come in. I don’t judge my compositions immediately, I just take time and I do it after a week or so. I think it could be a great song if the right director or the right lyricist comes on board.

“Mostly my instinct has been right but sometimes it all goes wrong. Mostly there’s also a lot of spiritual energy going in. Good intention. So I feel we need a blessing for everything we do creatively for it to become magic,” he added.

On launching the new acting leads, A.R. Rahman said, “It is my pleasure to introduce the talented lead cast, Ehan Bhat and Edilsy Vargas. They both are very promising and have a lot of potential in them. I wish them a great cinematic journey ahead.”

Ehan Bhat said, “I am humbled with the response that Edilsy and I have been getting since the launch of the 99 Songs trailer. The support and encouragement for our film and its music is heartening. I am grateful to Rahman sir for giving us this opportunity which doesn’t come easily for someone with absolutely no background in Bollywood. It has been such an unbelievable journey.”

Taking to Twitter on Tuesday, Bhat also retweeted a promotional post by Jio Studios which announced the release date and tagged those involved with the project.

99 Songs will release in Hindi, Tamil, and Telugu on 16th April, 2021. Presented by Jio Studios, the film is produced by A.R. Rahman’s production company YM Movies and co-produced by Ideal Entertainment.