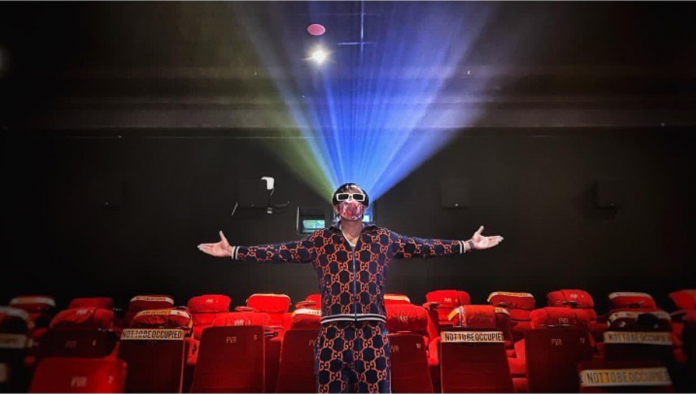 Ranveer Singh completed a decade in the Indian film industry with Band Baaja Baaraat and celebrated the milestone by returning to his ‘sacred chamber of dreams’ — the cinema.

The romantic-comedy film stars Anushka Sharma and Ranveer Singh which completed 10 years today. Helmed by director Maneesh Sharma, the film is a love story set in the world of wedding planning. It was released worldwide on 10 December 2010.

As he quickly embraced more and more roles, he steadily went on to win the hearts of all ages and has been dubbed Bollywood’s ‘live wire’, crafting a unique space with his eclectic roles and performances, together with his unconventional sartorial statements.

On Thursday, Singh took to social media to mark the 10-year anniversary with fans in tribute to the industry that would cement his career evermore. On Instagram he shared a picture of himself in the standing in the middle of an empty cinema auditorium, in front of the projector with arms wide open. Due to the ongoing pandemic, the actor can be seen wearing a mask to match his Gucci tracksuit.

He captioned the post: “To commemorate my 10 year milestone in the movies….it was only fitting that I return to the sacred chamber of dreams … it was marvellous.”

The actor has had more hits than misses in his filmography over the years. He has proved his mettle in the various roles in films like Ladies vs Ricky Bahl, Lootera, Goliyon Ki Rasleela Ram-Leela, Gunday, Dil Dhadakne Do and Bajirao Mastani. He exalted to the upper echelons of Bollywood with the critically acclaimed hits such as Padmaavat, Simmba and Gully Boy.