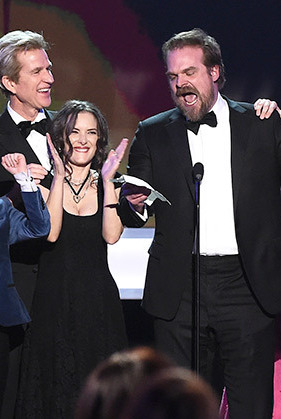 Actors and actresses were honoured for their work at the SAG awards in Hollywood last night. However an important issue was seen as a popular theme in acceptance speeches. On Friday a ban on Syrian refugees and entry of citizens from 7 Muslim countries for 120 days was put in place under Trump.

That’ 70s show actor, Aston Kutcher introduced the night by welcoming “everyone in airports that belong in my America (…) we love you”. Best Supporting Actor in Moonlight, Mahershala Ali discussed his mother’s reaction to his conversion “She didn’t do backflips (…) but I tell you now, you put things to the side and I’m able to see her and she’s able to see me. We love each other. The love has grown. And that stuff is minutia. It’s not that important.” Veep actress Julia Louis-Dreyfus won Best Comedy TV Actress. The comedian made many references mocking Trump, ““I’M THE WINNER, THE WINNER IS ME, LANDSLIDE.” She spoke about her experience of being a daughter of an immigrant, “This immigrant ban is a blemish and it is un-American.” Best Comedy Ensemble went to the Orange Is The New Black cast, actress Taylor Shilling said “What unites us is stronger than the forces that seek to divide us.” The Stranger Things cast won Best Ensemble for A Drama Series, allowing David Harbour to make a powerful speech, “We will shelter freaks and outcasts, those who have no home.” And “will punch some people in the face when they seek to destroy what we have envisioned for ourselves and the marginalized.”

There was also conversation about the amount of actors of colour nominated. Fences actress, Viola Davis specified that the actors of colour had been nominated “because they deserve to be (…) not because of the colour of their skin.”

In addition to the Trump storm, the British public have taken it upon them to ban the USA President from making a State Visit. The petition currently has one million signatures.

Which Hollywood star would you like to see speak out against Trump? Let us know your thoughts. #BritAsiaTV.