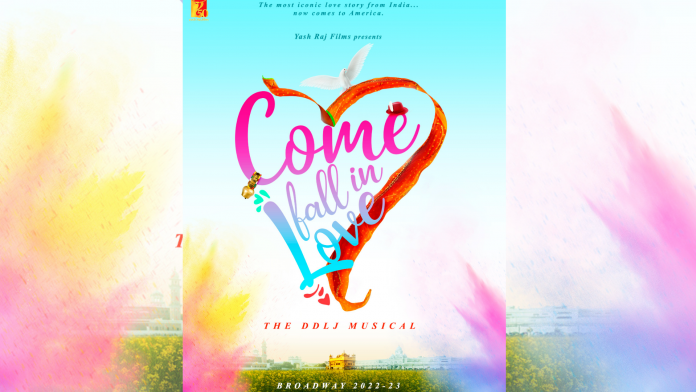 Come Fall in Love – The DDLJ Musical is being produced by Yash Raj Films and is based on an original story by Aditya Chopra, son of legendary director Yash Chopra.

In a press note, Chopra said: “26 years back I started my career with a film called Dilwale Dulhania Le Jayenge (DDLJ, what it is more famously known as). The film created history and changed my life and many others forever. But what many don’t know is that I never intended to make DDLJ in Hindi.

He continued, “As a 23 year old young man greatly influenced by Hollywood and American pop culture, I thought I would make a couple of Indian films and then I would be off to Hollywood and make DDLJ for a worldwide English speaking audience with Tom Cruise as my leading man. That obviously didn’t happen. DDLJ released in 1995 and became the longest running film of Indian cinema. It gave me my identity and kickstarted an amazing journey for which I’ll always be grateful.

The director concluded: “I’m terribly nervous and incredibly excited. I’m a hardcore cinema guy, I have never done theatre in my life and here I am trying to pull off the craziest ambition of my life […] I’m once again a student, each one of my team members is more experienced than me in the world of theatre, I’m the rookie and I’m loving every moment of it. I’m all set to learn, explore, create and enjoy with these wonderful theatre artists and the magical world of Broadway Musicals.”

Come Fall in Love – The DDLJ Musical is set to be on stage in the Broadway season of 2022-2023. In September 2022, the musical will premiere at the Old Globe Theatre in San Diego.