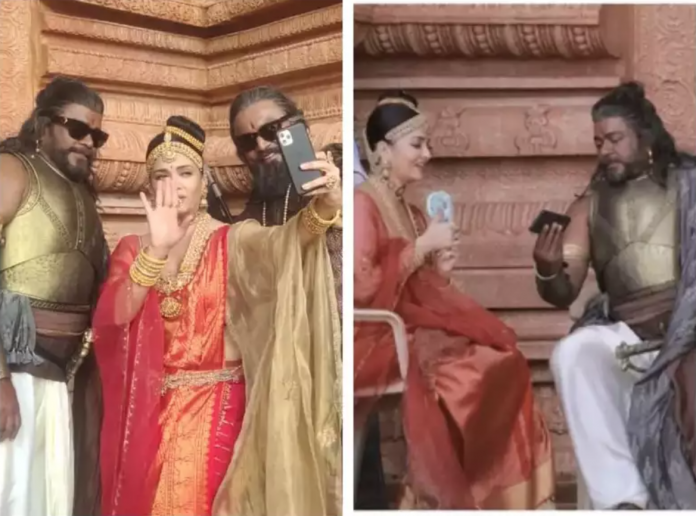 Aishwarya Rai Bachchan and Mani Ratnam’s ‘Ponniyin Selvan I’ is undoubtedly one of the most anticipated films. The trailer of the film has already raised the excitement level amongst the audience.

Now, we have got our hands on some unseen BTS photos of the gorgeous actress from the sets of the movie where she is seen hanging out with her co-stars.

Aishwarya’s co-star R Prathiban took to his Twitter handle to share some behind-the-scene pictures with the actress from the sets of the film. In the photos, Aishwarya is seen taking a selfie, posing for a group picture and chilling with his co-stars on the sets of the film.

Dressed in a red and golden heavy silk saree with golden ornaments, Aishwarya looked drop-dead gorgeous. While one picture shows Aishwarya sitting with a portable fan to beat the heat and looking at pictures on R Prathiban’s cellphone, another one had several supporting actors in costume, sitting on the floor during the break.’

The period drama based on a historical fiction novel by Kalki Krishnamurthy, is written in Tamil, which tells the story of early days of Arulmozhivarman, who later became the great Chola emperor Rajaraja Chola I.

Aishwarya essays a double role of Pazhuvoor queen Nandini and her deaf and mute mother Mandakini Devi in the period drama. Apart from her, the film also stars Trisha, Vikram, Jayram Ravi among others. It is slated to hit the theatres on September 30 in Tamil, Telugu, Kannada, Malayalam and Hindi.