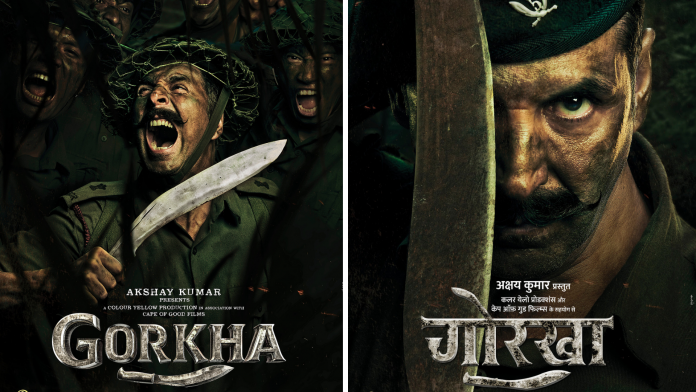 Akshay Kumar will be essaying the role of legendary 1971 Indo-Pakistan war army veteran of the Gorkha regiment, Major General Ian Cardozo, in Gorkha.

Akshay Kumar is set to portray Major General Ian Cardozo in Gorkha — a former Indian Army officer who headed a battalion and a brigade despite his disabilities as an amputee due to a war injury.

Sharing a first look at Gorkha on social media, the Bollywood megastar explained how the very inspiration compelled Kumar to take on the project personally.

Sometimes you come across stories so inspiring that you just want to make them. #Gorkha – on the life of legendary war hero, Major General Ian Cardozo is one such film. Honoured to essay the role of an icon and present this special film.

Director Sanjay P Chahuan added: “Honoured and excited to present my film #Gorkha, based on real life story of Major General #IanCardozo, a story of true sacrifice and valor.”

Aanand L. Rai, who financed the film said: “This one is for the 75th anniversary of Indian independence &Indian army. Extremely honoured to announce @cypplofficial‘s with @akshaykumar, #Gorkha. A story of courage&honour of Major General Ian Cardozo.”

Major General Ian Cardozo, the first war-disabled officer of the Indian Army to command a battalion and a brigade added: “I feel honoured for this story to be told on the 50th anniversary of the 1971 war.

Major General Ian  Cardozo continued, “It commemorates the courage and sacrifice of the armed forces of India. I look forward to working with Anand & Akshay as they bring this to life. This story reflects the values and spirit of every officer of the Indian Army.”

It is presented by Colour Yellow Productions in association with Cape of Good Films, Gorkha and backed by Anand L. Rai and Himanshu Sharma.

Kumar will next be seen in Sooryavanshi this Diwali, followed by Prithviraj, Bachchan Pandey, Raksha Bandhan, Ram Setu, andOh My God 2!