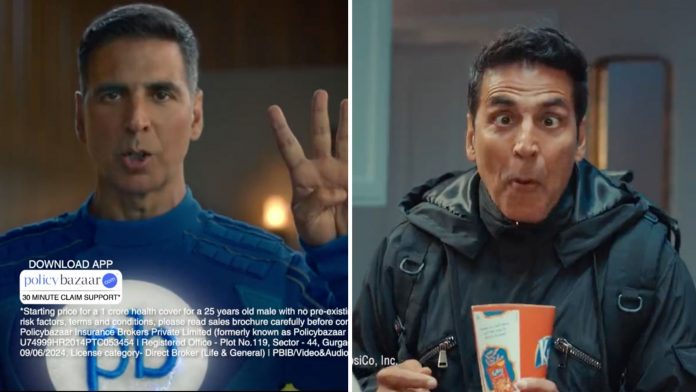 Bollywood icon Akshay Kumar has proved his versatility outside of the big screen having appeared in two very distinct ad campaigns.

With over 20 brand endorsements under his belt, Kumar is recognised for engaging audiences with an exciting repertoire of characters for television campaigns and films alike.

His latest campaigns for Policybazaar and snacks brand, Kurkure is testament to his adaptability. For Policybazaarour, Kumar transforms into a superhero avatar, Mr Policybazaar, where he is seen helping a distressed woman at a hospital sort out her health insurance.

The ad proves how Kumar continues to influence and engage with the public seamlessly — with his inventive and engaging roles to promote brands and causes he endorses.

In the ad, the actor can be seen as a thief sneaking into Samantha’s house at night but gets distracted from the mission when he spots a snack in the kitchen, and starts munching it. As he is about to sneak out, he gets caught red-handed by Samantha and her family, who snatches the packet, before informing him lovingly they had arranged a vehicle for him – only to realise a police siren in earshot.

On the film front this year, Kumar will next be seen playing a diverse array of characters across many genres including: Prithiviraj, Bachchan Pandey, Raksha Bandhan, Ram Setu and Oh My God! 2.