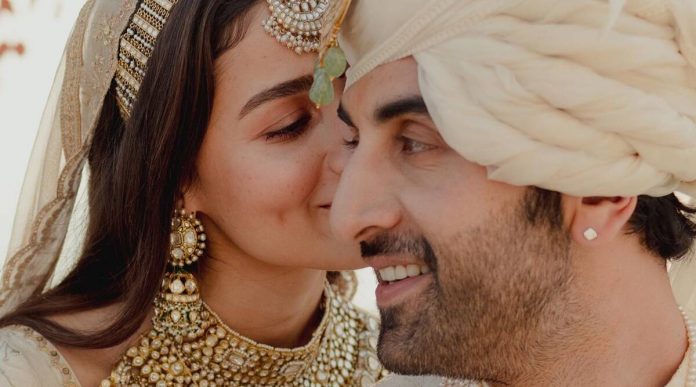 Alia Bhatt has immense love and respect for her husband Ranbir Kapoor. The couple tied the knot in April this year after dating for almost three years. During a rapid-fire round with ETimes, Alia revealed that Ranbir’s biggest strength is his ‘silence’. Elaborating further, she said, “He doesn’t find the need to speak, as in, he doesn’t find the need to make a point. Which is why he is actually just observing, it’s all just coming to him. He can just be silent and have no thoughts, that’s his biggest strength.”

The actress was also asked which is her favourite performance from Ranbir’s filmography, to which the actress smiled and said ‘Barfi’.

Alia recently announced her pregnancy on social media, and it was met with some negative reactions. Alia chooses to focus on the positive side as she says, “It was a beautiful experience. There was so much love and positivity. We received so much warmth. When you talk about the noisy people, that I expected because every beautiful thing has a detractor. Chaand pe bhi daag hai. I wasn’t surprised by the negative reactions nor was I bothered by them. I feel these things originate from a very stupid and shallow space. I remember only the good things and there’s still so much love coming in. Why not focus on the positivity instead of focussing on a few nonsensical eyebrows.”

Apart from ‘Darlings’, Alia will soon be seen sharing the screen space with Ranbir Kapoor in Ayan Mukerji’s highly anticipated film ‘Brahmastra’. The film is all set to hit the theatres on September 9.