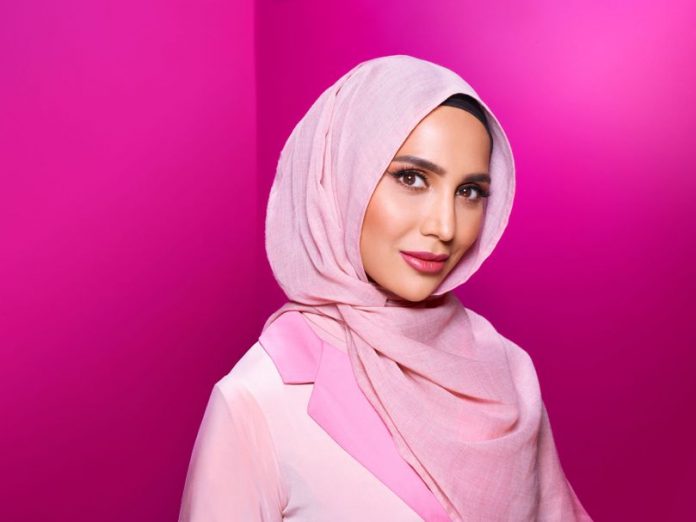 L’Oreal Paris Elvive has made history by casting a hijab wearing model to front their hair care campaign.

Amena Khan, who is a very successful beauty blogger and boasts more than half a million followers on Instagram, and is a co-founder of beauty brand Ardere Cosmetics.

The blogger has come together with a diverse range of ambassadors and influencers, for the new L’oreal campaign, that features model Neelam Gill, McFly’s Dougie Pynter, and singer Cheryl Tweedy.

A game changing new campaign!!! 👏🏽❤️ So… lately I’ve had a complex relationship with my hair feeling lacklustre. When I take off my scarf, I want my hair to be more radiant – don’t we all? 🙆🏽‍♀️✨ I’m so excited and incredibly proud to announce that I‘m part of the new L’Oreal Paris Elvive World of Care Campaign which showcases Elvive’s breadth of products catering to a wide range of demanding hair types. I’m The Pink One which has been specially formulated for dull hair to boost shine. @lorealhair #WORLDOFCARE #ELVIVEXRANKIN #ALLWORTHIT #AD

L’oreal Paris is the number one hair care brand in the UK, and has a powerful voice in the industry, where movements like this will be watched.

When speaking to Vogue, Khan said: “How many brands are doing things like this?

They’re literally putting a girl in a headscarf – whose hair you can’t see – in a hair campaign. Because what they’re really valuing through the campaign is the voices that we have.”

In the latest campaign, the blogger is seen wearing a pink headscarf and matching pink lipstick on a bold pink background.

I arrived to a set that was beyond anything I could imagine. With several open studio areas spread across a giant building, the first thing that hit me was the scale of the project. There were colourful sets assembled with multiple people behind the cameras. Amongst the buzzing of constant activity, the crew & @lorealhair team would often smile & say hello, always welcoming. Shoots like this are invariably stressful somewhere along the line, but I didn’t detect a hint of that. ⠀⠀⠀⠀⠀In the makeup room, I couldn’t contain my excitement about the project. @karindarnell regaled us with stories about the celeb world (being Riri’s MUA), all the while swiftly working her magic with makeup. We exchanged stories of working & of motherhood. @neelamkg joined us. Being an internationally successful model, I’m always struck by how “real” & humble she is. All 3 of us chatted away about life, triumph & sacrifice. ⠀⠀⠀⠀⠀Lunch was great – lots of Vegan options so I was happy. The atmosphere was energised, especially as @ling.kt was on my table. She uplifts everyone around her. I ate quickly as we had some outdoor photography to do. ⠀⠀⠀⠀⠀Our beloved weather did the predictable… as we stood at the main door, it started to drizzle. But before I knew it, someone had slipped a robe & slippers on me. There I was, in a van with 5 other people from the team, driving down to the canal in the area. It was surreal but exhilarating. ⠀⠀⠀⠀⠀Back at the studio, super friendly @francescajordan did touch ups as it grew closer to my turn. The photographer was the legendary genius, @rankinarchive. A quiet, down to earth man, he was deliberate & thoughtful in every shot. I felt confident, unexpectedly calm & filled with gratitude. ⠀⠀⠀⠀⠀Then came the interview. @lillycon, the interviewer, put me at ease quickly. She has the kind of vibe that makes it easy to speak with honesty – to just be yourself. ⠀⠀⠀⠀⠀When the long day finished & I was back on the train home, I reflected… not on how awesome this campaign (obviously) is, but more on the kindness I was privileged to have encountered that day (in so many more ways), & the beauty in connection between human beings <3

Posting the campaign video on her Instagram, Khan said: “So… lately I’ve had a complex relationship with my hair feeling lacklustre. When I take off my scarf, I want my hair to be more radiant – don’t we all… I’m so excited and incredibly proud to announce that I‘m part of the new L’Oreal Paris Elvive World of Care Campaign which showcases Elvive’s breadth of products catering to a wide range of demanding hair types. I’m The Pink One which has been specially formulated for dull hair to boost shine.”

Last year, we also saw the launch of singer Rihanna’s new make up line, Fenty Beauty, where there was a diverse range of model that featured in the campaign, including a hijab wearing model.

There have also been more diverse faces on the runway, and on magazines, with the first hijab-wearing model featuring on the iconic Vogue magazine as the cover.

L’oreal, has also recently evolved it’s famous signature from “Because you’re worth it” to “Because we’re all worth it”, highlighting the movement and expressing equality.

“At L’Oréal Paris we want to create campaigns that deeply connect with our consumers through spokespeople that inject sincerity, emotion and personality,” says Adrien Koskas, UK General Manager of the brand.

They’re certainly has been a huge change in the beauty and fashion industry lately, and will hopefully progress further. The representation of diversity shows how far culture and race has come, and is a celebration when diversity is showcased on such huge platforms and brands.