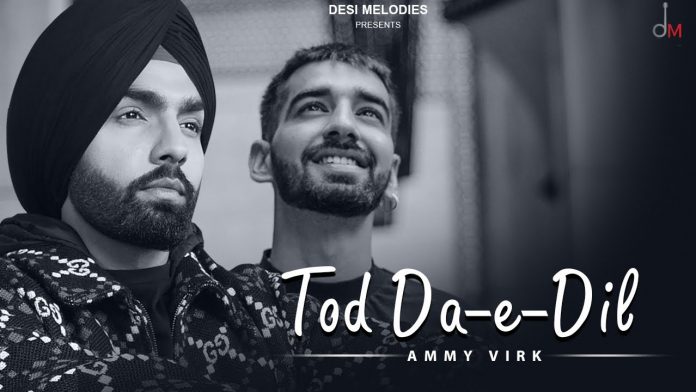 Punjabi singer-actor Ammy Virk, who is best known for his song ‘Qismat’, is back with a new track titled ‘Tod da-e-dil’.The latest track is a melodious breakup song, which is written by ‘Sakhiyaan’ fame singer Manindar Bhuttar.

Ammy took to social media to Announce the release of “Tod da-e-dil and wrote:
‘Special thanks to my younger brother Manindar Buttar for beautiful lyrics’. He thanked Avvy Sra for the beautiful music.
On the acting front, Ammy is all set to make his Bollywood debut in Kabir Khan’s ‘83’, which stars Ranveer Singh in the lead role.

Ammy plays the medium pacer Balwinder Singh Sandhu. He will also be seen in the upcoming Hindi film, ‘Bhuj: The Pride Of India’, which is a patriotic drama set against the backdrop of the 1971 Indo-Pak war. The film stars Ajay Devgan.

‘I really feel blessed to represent India in both these films. It was my childhood dream to foray Bollywood and be a part of such impactful stories. Now, whole India will watch my acting skills on the big screen,’ Ammy said.

News Priyanca Kumari - 27th October 2020
0
The All Party Parliamentary Group (APPG) have published the latest report into Anti-Sikh hate crimes this October. There are more than 150 constituencies across the...
© BritAsia TV 2020 All rights reserved. Made By Gloss