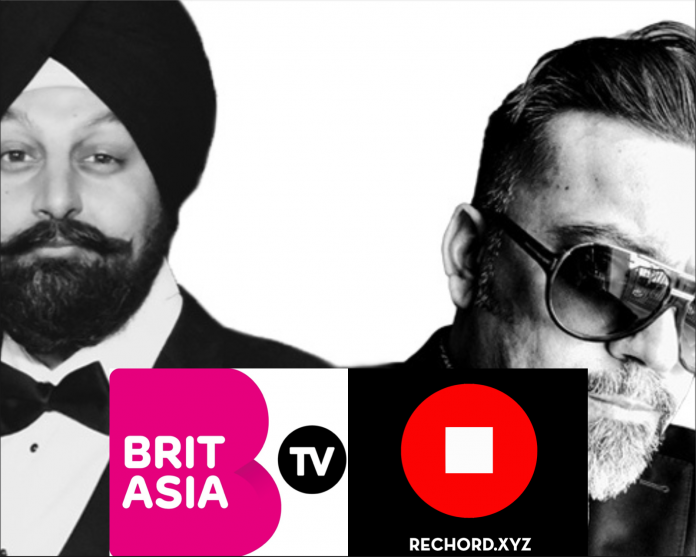 BritAsia and RECHORD.XYZ have partnered to support and mentor talented musicians, facilitated by a ‘recording studio in your pocket’ concept.

BritAsia TV are pleased to announce a ‘recording studio in your pocket’ concept, talent show and investment fund – in order to level the playing field for budding artists.

The concept will allows recording, mixing and sharing music with ease. BritAsia will be guiding and mentoring upcoming artists through the entire process from pre to post production. Exclusively targeting the Asian communities worldwide, RECHORD.XYZ launches later this year.

The new partnership aims to help talented musicians who have struggled to get an opportunity in the music industry. BritAsia will disrupt the current system, with a partnership that gives budding artists the opportunity to excel based on their skill set as opposed to their connections in the community and resources.

The fund’s first share acquisition will be in the mobile phone based music recording & mixing app RECHORD.XYZ. Designed to provide mobile phone users with a recording studio in their pocket, the platform raises the bar in recording, mixing and sharing tracks with a simple intuitive interface.

BritAsia TV are also committing to mentoring 100 budding artists through a series of interactive talent shows utilising the app. RECHORD.XYZ will also be a new Indian mainstream-pop record label, with an innovative digital A&R strategy.

CEO of BritAsia TV, Tony Shergill said: “Given the BritAsia Fund’s commitment to promoting, supporting and investing in the Asian community, not to mention our channels’ influential position not only in Bollywood and Bhangra, but also across Asian R&B, Urban, Hip Hop and Underground music internationally, creating a music fund to complement those activities was a natural next step.

“I’m delighted that RECHORD.XYZ is the first investment to emerge from this initiative. There are more than 5m bands and 20m content makers worldwide using mobile devices to make music today, and together we have some extraordinarily exciting plans for the app in India and the UK, we integrate this across our broadcast offering here in the UK and back in India, not to mention our designs to launch an entirely original Record Label.”

Shergill added: “The BritAsia deal is great for us. Alongside developing RECHORD.XYZ over the last year we’ve been looking for the right people and the right platform to partner with, and in Tony and the BritAsia team we identified the synergies and reach we needed to make the product fly. We know what we’ve got, we know the landscape really well, we’ve been designing and building and operating recording studios for some time now, so we get the business and the tech and we know what the market wants and we have a unique product that’s not currently out there.

“Together, we are building a range of products, services, marketable entertainment concepts and gold-standard technology partnerships that will not only provide RECHORD.XYZ with global reach and recognition, but will place us at the very heart of an explosive Asian music market that’s growing exponentially every year.

“We are very much focused on getting the partnerships right, we had several offers to take on investment in the US and UK, but we feel the growing Indian market is the place to launch our innovation, and Tony’s experience in the UK and business relationships in India made this a stand-out deal for us.

“RECHORD.XYZ is a recording studio in your pocket, it’s about chasing your dream, being able to create, collaborate and champion music makers […] there’s much more to follow as we roll out the label in parallel across the UK and India, I’m pleased to be working with Tony and his team in the launch of the BritAsia Music Fund – there’s a lot for us as a business – and as the Asian community – to be really excited about.

“Indians love music, it’s in our DNA, it’s part of our culture and our heritage… we’re about to make that all explode with the power of RECHORD.XYZ supported by the BritAsia Music Fund.”