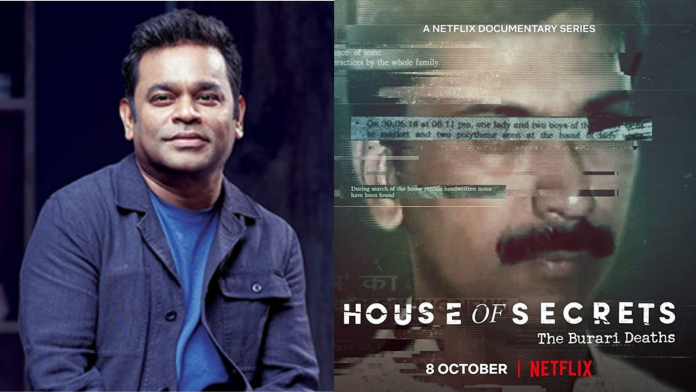 AR Rahman has composed the score for Netflix’s upcoming docu-series House of Secrets: The Burari Deaths’.

The award-winning composer, who has predominantly scored soundtracks for feature films across multiple languages, said House of Secrets gave him an opportunity to have a more “nuanced musical approach”.

Netflix’s House of Secrets: The Burari Deaths traces the mystery behind India’s infamous Burari Deaths, where eleven members across three generations of a family were found dead under strange circumstances in their house in Delhi. Directed by Leena Yadav and Anubhav Chopra, the original score of the docu-series is composed and produced by the widely-acclaimed A R Rahman.

“Collaborating with Leena Yadav ji on House of Secrets was a unique experience for me. Since the docu-series concerns a sensitive, complex issue, it required a distinct, nuanced musical approach — enigmatic yet gripping. I am glad to have worked on such a project, which so far has been an unexplored territory for me,” Rahman said in a statement.

Taking to Twitter to announce his collaboration on the project, the composer said it was a “pleasure” to work with the director and described his approach to scoring the series, along with the trailer:

Pleasure working with the talented @leenayadav ji on The House of Secrets. As this project explores a complex issue, the music score had to be mystical and engaging. This was unexplored territory for me personally.https://t.co/xY2MJtzwJn

The documentary invites viewers to take a look at the different stages of the investigation, bringing forth “striking and unexpected revelations”.

House of Secrets: The Burari Deaths will be available to stream on Netflix from 8 October, 2021.