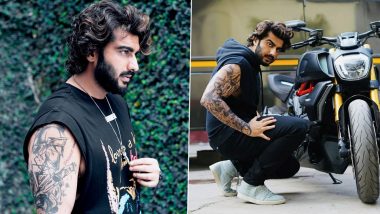 Bollywood actor Arjun Kapoor has a knack of getting tattoos. The actor has already got himself inked twice and now he plans to get more. The actor who would soon be seen in Ek Villain 2, shared that he was more than happy that his character too demanded a lot of tattoos to be inked.

Sharing a bunch of photos from the shoot, flaunting his tattoo, the actor opened up how Ek Villain 2 became an amazing project for him to work on. “I got to sport such insane tattoos that define my character and personality in the film. Getting inked holds a different meaning for everyone, for me it was always about imprinting a part of your soul on to your body. With this film, I can safely say that I have been reunited with my love for body art and I thank Mohit Suri for covering me with tattoos that I will cherish forever. I already have 3 tattoos. Time to maybe get 1 more”.

Arjun also explained why loves body art so much. “For me, tattoos are a form of expression and I love it! It’s cool, sexy, beautiful and I dig it. I have always wanted to sport tattoos in my films and it is not a secret that I love tattoos deeply. For me, they are always personal. I’m always hunting for cool designs and talking to people about what my next one will be”.

Meanwhile, on the work front, Arjun is awaiting the release of Ek Villain 2. He will be seen sharing screen space with Tara Sutaria, Disha Patani and John Abraham. The film is touted to be a spiritual sequel of the 2014 film Ek Villain although its storyline is completely different. The 2014 film starred Shraddha Kapoor, Sidharth Malhora and Riteish Deshmukh in pivotal roles.