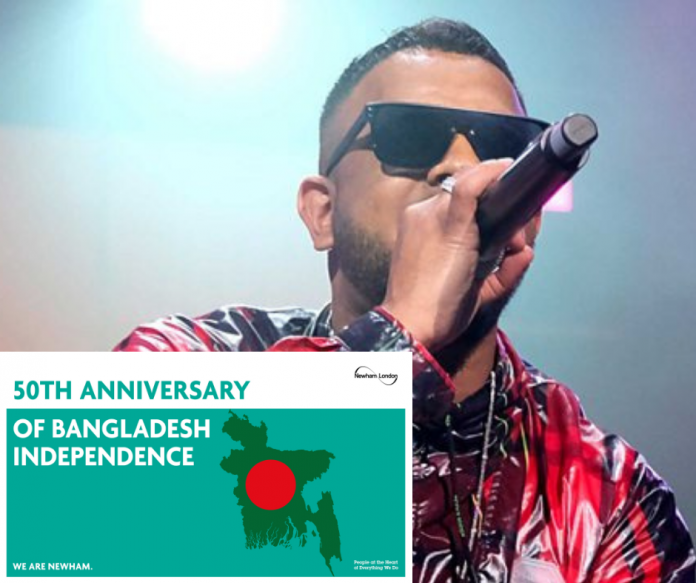 Today marks 50 years of Bangladesh Independence — and to celebrate the milestone, London Borough of Newham will host an online event that explores the ‘Heritage, Culture and Tradition’ with a special performance by Mumzy Stranger.

Marking the separation of what was once East Pakistan, today commemorates 50 years of Bangladesh Independence, making 26 March a national holiday.

On this day in 1971, Sheikh Mujibur Rahman signed a declaration making East Pakistan the sovereign and independent country of Bangladesh.

It prompted a nine-month long Bangladesh Liberation War, which claimed the lives of between 300,000 to 3 million people, although the casualty figures are not exact and millions more were displaced.

Today, London Borough of Newham will host an online event to talk about the ‘Heritage, Culture and Tradition: Being British, Bangladeshi & Me’ hosted by a panel of high profile Bangladeshi faces and inspirational forces.

Attendees will have the opportunity to ask the panel questions as well as participating in an interactive quiz. The webinar will conclude with a live finale performance by artist Mumzy Stranger.

Mumzy Stranger or his producing name SP (Stranger Production) is a British rapper, singer, songwriter and record producer known for his distinctive R&B, soulful-bashment style. He has won many awards, Best Urban Act at the AMA, Best Urban Act at the BAMA and best producer. He is known for many hit singles worldwide, “Fly With Me”, “Come My Way” and more.

He is the first artist of Bangladeshi descent to have entered the mainstream music industry and still remains to this day one of the latest prospects of British-Asian R&B/Bashment artists in Britain. Mumzy sings in a unique style combining reggae, dancehall, R&B and soul, and in different languages including Arabic, Bengali, English, Hindi and Punjabi.

This event will be online, using zoom. Security measures will be in place to ensure a safe online environment.

For more information about the 50th Anniversary of Bangladesh Independence and other guest appearances, click here.

To register online for the free event, visit https://www.eventbrite.co.uk/e/50th-anniversary-of-bangladesh-independence-tickets-146585817125.