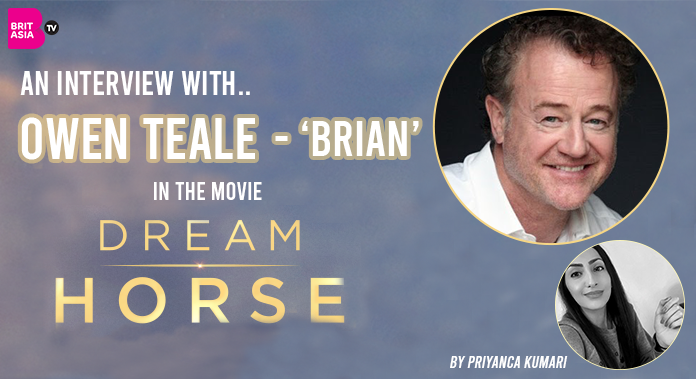 In our exclusive BrtiAsia TV interview, Priyanca Kumari speaks to Owen Teale (Game of Thrones, Line of Duty) about co-starring in this year’s feel-good film, Dream Horse, peeled from the headlines of 2009’s Welsh Grand National.

The film is based on true events in the run up to the Grand National, and stars Toni Collette in the lead role, alongside Owen Teale as her husband and Damian Lewis, together with Joanna Page, Karl Johnson, with Nicholas Farrell and Siân Phillips.

Directed by Euros Lyn, the film brings to the big screen the story of the award-winning race horse and the Rhymney Valley community which helped raise him.

To do this, Jan Vokes (Collette), a cleaner and bartender, had to galvanise her initially reluctant husband Brian (Teale) and local accountant Howard Davies (Lewis) to help her form a syndicate of local people to breed a foal, which they name ‘Dream Alliance.’

On the racetrack, he proves himself to be more than a match for the multi-million pound racehorses he comes up against – a true working-class champion, taking on the establishment at their own game. But much more than this, Dream begins to alter the lives of everyone in the syndicate, not least Jan’s. He is everything to her: friend, confidant and an escape from a life of always putting other people’s needs first.

Speaking about playing the part of a non-fictional character, Teale reveals it was the “chance of doing a transformation”, that drew him into the role when presented with the script. Read our full Q&A for Teale’s own memory of the headline win circa 2009, his relationship with the real-life couple and his favourite moment on set.

Priyanca: Congratulations, on the reception of this film. It’s lived up to the promise of being feel-good film of the year. I came away with that sense of hope it instils — regardless of your aspirations, it just reminds you if you’ve got the willpower, get up, go and do it, there’s always something out there. And that’s what the story of Jan Vokes literally tries to evoke – in this heartwarming story about triumph against adversity.

It’s inspired by true events that took place in the run up to the Welsh Grand National. But did you know about this true story before you were presented with the script?

Owen: I didn’t know the story intricately. I wasn’t really into horse racing but I’d heard it on the news back in 2009, a long time ago and probably would have been when I was with my parents in Wales visiting and they were following the story on the local news. But I didn’t know about the documentary, I’d never seen that and I can’t say the story really stayed with me, until I then read the script, and they were making the film and they said “look at the documentary, look at these extraordinary people and what they did.”

I looked at the world they come from and it was so similar to the world that I grew up in down the roads. I related to it, I related to all the characters and I thought yes! I’d always felt that we were marginalised when I was growing up and if I wanted to be something – if I wanted to be an actor – I had to get out. And I had to go to London probably, eventually, and I don’t think that’s true anymore and I’m just so pleased there’s a story like this, about Wales that’s going to international movie theatres.

Priyanca: Yes, it’s been put on the global stage!

Owen: It’s on on general release! Not just appearing in the odd place here and there and gone in a heartbeat. These people really believed in it (Warner Brothers, Toni Collette) commit herself to it, she believed in this simple but wonderful story and I think she had more belief in it than me! When I read it I was thinking, “it’s so simple – we know what’s going to happen, and it wouldn’t be a film unless the horse did well,” and nothing prepared me –  nothing prepared me for when I went to Sundance Film Festival and they showed that film and I was in the audience and you start rooting for this horse because there’s all these people personified in the horse — the love and everything they had, their hopes, their dreams, they’re all in this horse and you’re just rooting for him!

Priyanca: That’s a really lovely way of putting it. And needless to say there’s a point where there’s a bit of a fallback and we all get a little scared for the future of the horse but in that, as you’ve just said so poetically, there’s a bit of everybody in that horse, the hopes and dreams of everyone else were almost embedded in the resilience of the horse. It was more than getting the horse back on its feet, it was everybody because they clearly had something else they wanted to strive for.

You play Jan Vokes’ husband, Brian. So when you were presented with the script, what was it about his character that drew you into the role?

Owen: The chance of doing a transformation. He is so – oh my God – when I watched him in the documentary, when he starts, he could barely get out of the chair, you know? He’s got arthritis. He has a chuckle to him but he’s let his physical being go — he’s accepted that maybe his days, physically are over. His tattoos look so incongruous! It’s such a statement when people have big tattoos like that and he’s this kind of man who’s got tattoos on ears and he has no teeth and he bears these scars of a life well-lived. But you’ve got his wife saying to him, “no it ain’t over yet, and I haven’t done anything with my life and I’m not just going to complain about it, I’m going to do something. I’m going to breed a race horse! And he says, “yeah and I’m gonna play for Wales on Saturday… It’s not gonna happen.”

And of course we then, from that moment, we want it to happen. You just want it to be possible! They’re underdogs – to get into the world of horse racing — the elitism of it! When I started looking into it, the money of it, the privilege, the entitlement of the people involved in it. And then there’s this group of people from Cefn Fforest, this tiny place (laughs) who all have a share in this horse and he transforms Brian! He becomes robust again, he has something to say again! He knows what he believes and he’s reborn… and that’s what drew me to it.

Priyanca: It’s nice that you had a character arc — that character development to look into. For the three main characters anyway it’s proof that no matter what your individual aspirations were, something had to change. And it was that horse, Dream Alliance that breathed that life into you again.

Because it’s based on real-life characters, were you able to look to the real husband and wife for inspiration. How much correspondence did you have with Jan and Brian to really understand where they were emotionally at that point in their lives?

Owen: Well because there was already the documentary made, which has already gone to Sundance some years before that, there was an awful lot you could get just from watching that and in their interviews. I therefore didn’t want to meet them too early on because you have to build up this own belief in yourself. It was going well and Toni was extraordinary and wonderful as she always is, and it was then I was direct with her and said “they’re going to come to Chepstow at the races — they’ll be there — is that all right?” So they came, and in between shooting we went out for lunch with them, they were nervous, we were nervous. I wouldn’t know what it’s like to find somebody playing you in a film!

Priyanca: Yeah! It’s not as though it’s that old, it only happened in the last decade or so. Appearance-wise they don’t look too different to how you were able to portray them so it feels very current — not like you’re reflecting on a period piece where you’re drawing on inspiration from a 90-something year old — they’re still fairly young.

Owen: Exactly! They can remember (laughs). They wanted a bit more – especially Brian. He wanted a bit more ‘saltiness’ to him. But the director was treading a line of ‘no no no’ we don’t need another documentary.

Owen: When the horse wins, because the horse wasn’t there when we did that. We filmed with a guy on a golf buggy with a tennis ball on a stick going down the track. And it was a measure of the sense of community amongst the actors, just like the real characters. In that we could actually convince ourselves that a horse was winning and throw our drinks to the air to cheer and show unbridled joy – because they filmed the horses racing before we filmed our scenes in the stands, so you have to marry the two. That’s making film!

Priyanca: That’s a testament to everybody’s acting! And on that note, well done on this feel-good film of the year.

Dream Horse is releasing in UK cinemas on Friday 4 June, 2021.