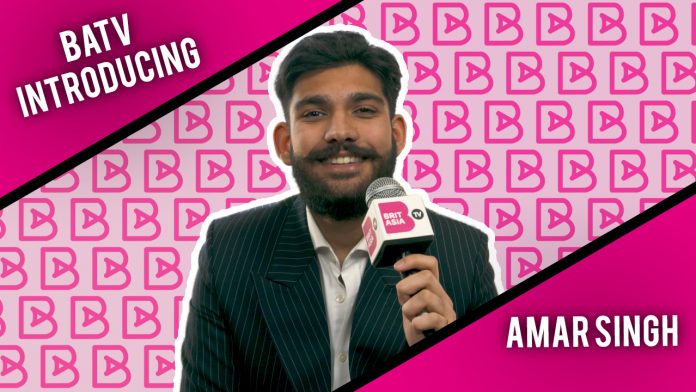 We caught up with upcoming UK Punjabi singer Amar Singh to talk about his debut single ‘Hassdi Aa’, working with producer Aman Hayer, and his future plans.

Amar discovered his talent whilst at High School, when his music teacher brought an external teacher in to teach him and his friends the Dhol. After learning the musical instrument for a year, the external music teacher brought in a harmonium. The aspiring singer said he was fascinated by it and started singing along as his teacher was playing the instrument.

After his teacher heard the youngster singing, he encouraged Amar to keep singing and from then Amar learnt the basics and hasn’t stopped since.

Amar takes inspiration from the legends such as Gurdas Maan, Hans Raj Hans and Kuldeep Manak. These were the three that really inspired him, and their songs brought him closer to his Punjabi culture. The 21-year-old even learnt how to read Punjabi himself and is in the process of writing in the language as well.

For his debut track ‘Hassdi Aa’, he has worked with UK producer Aman Hayer. Together, they both came up with a different concept for the video. We see Amar dressed as an elderly person, who tells the story of meeting his wife to his granddaughter. The song is all about love, and he hopes that families will be able to enjoy the concept.

Amar hopes that he can be a beacon for the younger generation, and hopes to spread the Punjabi culture to them. He’d like to experiment with new sounds but also keep the pure Punjabi culture through his songs.

‘Hassdi Aa’ is now out and is also playing on BritAsia TV! Catch our interview with Amar below.