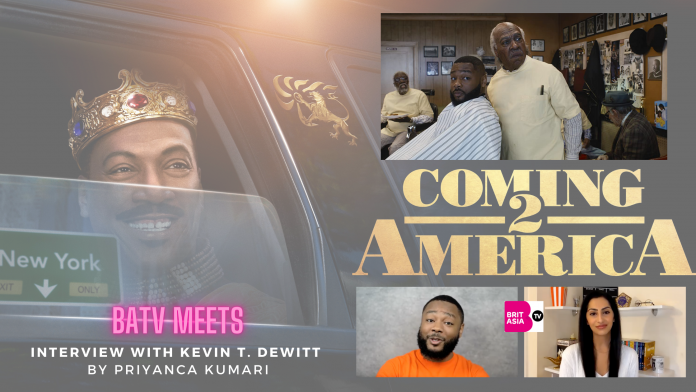 BritAsia TV caught up with ‘My-T-Sharp’s next customer, for insights on set of the sequel for Coming 2 America, which released on Prime Video earlier this year.

In this insider interview, Priyanca Kumari has a comedy catch up with Kevin T. DeWitt, the customer who falls victim to the barbers’ badinage inside NYC’s fictitious barbershop ‘My-T-Sharp’, about working with comedian Eddie Murphy, the shift in gender representations and becoming part of a pop culture phenomenon.

DeWitt features as the chosen one for the chair in the barbershop scene, until he gets exiled by Clarence, Morris, and Sweets for “politically-incorrect” reasons.

The iconic barbershop scene stars the original characters Clarence (Eddie Murphy) Morris (Arsenio Hall), and Sweets (Clint Smith). Not least their seemingly ever-present regular customer Saul (Murphy). And if Semmi (Hall) was right about one thing when stepped out of the car upon arriving in Queens, it’s that the barbershop hasn’t changed; including the barbers still working inside.

Speaking about the ostensibly age-defying characters, DeWitt confirmed it’s definitely one thing that did not change as well.

“The barbershop is still there, those barbers are definitely in the back and there’s got to be a fountain of youth that they’re not showing us, because they’re definitely sipping from it.”

“They’re doing something right […] fruits and vegetables and working out”, he added.

But how DeWitt got to sit in the barber’s chair for the all-important scene wasn’t so straightforward.

“I actually auditioned for another role in the movie interacting with Jermaine Fowler [who plays Lavelle Junson],” he said. “I believe the script went through a change and that scene got cut. A few months later, I got an email to come to set and audition with the director Craig Brewer.

“At the time I had no clue what the role was but, I knew it was Coming 2 America so I was all for it. When I got to set and read over the script my jaw dropped because I knew exactly the scene there were recreating and felt honoured to have the chance to audition for it. Everything moved fast. I got the script and was auditioning five or six minutes later. Then ten minutes after that I got the part and was rushed over to wardrobe.

“The next day I was on set with Eddie, Arsenio, and Clint. I was blown away by the chemistry everyone had in the barbershop scene. It was as if Eddie, Arsenio, and Clint never missed a beat based on how they interacted together. I’ll never forget Arsenio cracking jokes every day as soon as he stepped on set. Or how Eddie would be cool and collected then jump into his character at the drop of a dime. It was amazing to see,” he said.

When asked how the sequel will resonate with today’s audiences — from the “gentrification” of Queens, to representations of women since the 80s original, DeWitt said the time gap transformed the city and bestowed a necessary voice to many of the female characters throughout the film.

“This sequel uses the time gap between the original and itself to really highlight how much things have changed in the world since 1988. When Prince Akeem and Semmi come back to Queens they can see how the landscape has changed and the neighbourhood has transformed. When you look at NYC as a whole it is going through a ton of changes and gentrification. Some areas are benefiting from this and others aren’t. This is definitely something people in NYC can relate to when they take a look at how they portray Queens.

“I love how Prince Akeem is faced with the challenge of working on his royal duties while keeping peace in his family as well. His relationship with his daughter Princess Meeka was tested throughout the film. Especially with him going to find a royal heir without giving her a chance at the throne.

“I think female audiences will take notice of this and his relationship with his other daughters as well. The choice of him having all daughters and not all sons in Zamunda definitely was a good choice to give the ladies their time to shine and add more value to the family dynamic of the story and Prince Akeem. I think these changes are needed to tell a story 30 plus years in the making. The world is different and it is good to see them highlight the changes in NYC and giving women a voice through his daughters in the film,” DeWitt said.

Speaking about his laugh-out-loud moments from the film, DeWitt admitted his affinity for General Izzi’s scenes, played by Wesley Snipes.

“General Izzi all day long!” DeWitt exclaimed. “The moment he struts across the palace floor in Zamunda I burst out laughing. Snipes definitely brought laughter throughout the film but this moment had me rolling from the minute they showed him. Tracy Morgan also had me rolling from the first moments he came on screen as well. His coaching of Jermaine Fowler before the job interview was hilarious!”

As a developing actor, DeWitt said his takeaway from being on set was to be “ready for anything at any time,” adding “especially around someone like Eddie and Arsenio who aren’t going to let up on the funny!”

Is Netflix Smash Hit ‘Glass Onion’ is a dig at Elon Musk?