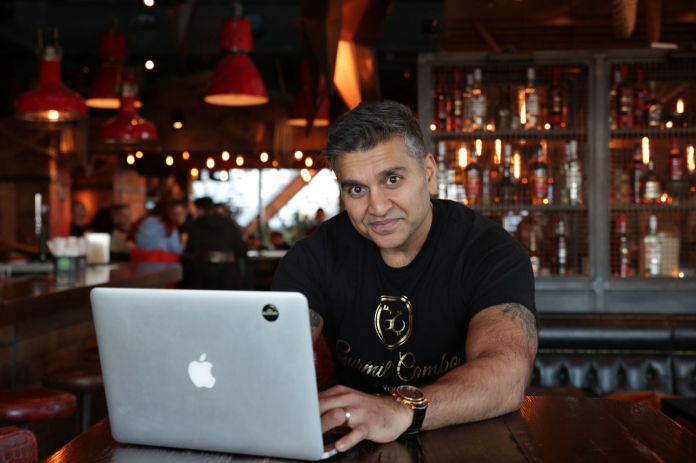 Cryptocurrency was created in 2009 — but how familiar are we with cybercash? As the ‘digital asset’ continues to see a surge in popularity, BritAsia TV spoke to crypto wizard and author of Crypto Millionaire Secrets, Gurmit Combo, to break down bitcoin and beyond… before it’s too late.

Priyanca: Simply, what is cryptocurrency?

Gurmit: Cryptocurrency itself is a very broad term as technically there are over 6000 out there.

Originally a cryptocurrency was an electronic asset, protected by secure cryptographic security which would allow it to be used as a means of payment like our normal currencies are. The difference being that there would be a finite amount and that it would not be subject to the control of a single bank or government but be decentralised and autonomous – ran automatically.

It did this on a network called the blockchain which in fact is not a new thing but has been worked on since the early 1970’s. It just so happened that the creator of Bitcoin cracked it and got it running seamlessly.

The very first cryptocurrency was Bitcoin and it came into existence on 3rd January 2009. Its creator gave a pseudonym, Santoshi Nakamoto.

It was the only cryptocurrency up until 2011 when Litecoin, Namecoin and Swiftcoin emerged. Now there were four and that remained so for the next few years until 2015, which is when things really started to move with the creation of Ethereum.

Fast forward to today and we now have at least 15 new cryptocurrencies emerging per week. Many are trash and garbage and have more hype and speculation fuelling their prices than strong technological fundamentals which is what really matters in the long run and life cycle of a cryptocurrency.

Priyanca: When did you venture into this field?

Gurmit: I grew up in the family business which sold industrial sewing machinery to the East London garment trade. As the clothing manufacturing sector declined in the late ‘90s, I decided to have a change in career and had my eyes on finance and property.

I started my financial journey after receiving my real estate training at a firm of chartered surveyors in London in the early 2000s. I went on to open up my own Estate Agency in London’s Docklands business district. We began by focusing on properties in London, then across England, and then moved into marketing properties in 12 countries around the world.

“Years later in 2008, the subprime mortgage crisis hit. The shady banking practices by bankers thousands of miles away, had a ripple effect on banking markets worldwide. Banks tightened lending. People stopped buying. Developers stopped building. And just like that, my whole business came to a halt. I had to let my staff go, one by one. I remember sitting on the floor of my office taking apart the last of the desks. It was heartbreaking and the experience was devastating… After losing almost everything and experiencing serious health consequences, I am determined to never put my financial security at risk again” – (G. Combo, Crypto Millionaire Secrets Blackbook).

I wanted to invest in something which I could personally possess and be able to sell immediately if I needed to, as back in 2008, even though I had a large number of properties, and I only need to sell two to get me out of hot water, due to the markets crashing, nobody was buying and even if they were, a property sale in the UK can take a minimum of 12 weeks.

So in 2013 I started to look for alternatives and being of Indian descent 22-24ct gold was the first place I started.  I had been going to Indian jewellery shops with my mum since I was eight when we used to go for our weekly Indian food shopping on Green Street and from as far back as then, I knew the value of this lovely shiny stuff. But this time it was not 22/24ct Sikh kara’s (bangles) or chains but bullion – coins and bars.

Then in 2014, in one of the many newsletters I was subscribing to, I came across Bitcoin and recognised the similarities between it and gold.

Priyanca: Why is it more popular now, than ever before?

Gurmit: There are a few reasons why cryptocurrency mania is sweeping the world right now. We in the crypto community have for years have been eagerly anticipating two specific events which would trigger widespread crypto adoption and investment.

The first event was for a globally reputable company to step up and “endorse” cryptocurrency. Paypal did this by saying back in October 2020 that they will be allowing their 300m+ users access to buying crypto via their platform. Then a month later they announced that they will allow all of their US customers to buy immediately and increased their weekly purchasing allowances from $10k to $20k per week…boom…off we go!

This gave everybody the confidence that this is the real deal, as a company such as Paypal who is globally trusted to have a reputation for secure payments would not endorse crypto if it was not water tight.

This gave the green light for the second event, the wave of investors we were waiting for. Institutional investors – pension funds, investment funds, publicly listed companies etc, who account for over $130 trillion of financial transactions per day! We knew that just a few percent of that would cause a huge surge in crypto prices, and right now, today, we are at the very beginning of the influx of that wealth into cryptocurrency.

Priyanca: Why should we be investing?

Gurmit: This is the future of money and companies such as Mastercard — recognise this as they have announced that they will allow their 1 billion+ global customer base to use certain cryptocurrencies as a method of payment as have Apple with Apple Pay – allowing crypto payments as well.

Companies like Tesla having purchasing $1.5b of Bitcoin have set the president for the other companies on the Dow Jones, S&P 500, FTSE and other stock exchanges to exchange their cash reserves for digital gold – crypto. Expect this trend to continue throughout the course of 2021 probably until 2023.

And of course, let’s not forget about good old PayPal who started off the roaring ‘20s crypto boom. They have so far only allowed their US customers to buy crypto. There are still the other 199 countries and 24 currencies apart from the US that they operate in and to whom, they will be opening crypto up to!

Plus, imagine if you invested $100 in Bitcoin ten years ago and never sold it. Today it would be worth around $48 million and rising. So imagine, with all that’s going on with the global payment providers allowing access to it like never before and institutional investors buying in like it’s going out of fashion — how much would $10 worth of “the right” cryptocurrency be worth in 2031?

Priyanca: When did you start / publish your book[s] and what has the feedback been for ‘Crypto Millionaire Secrets’?

Gurmit: I followed up with my second book – ‘Crypto Millionaire Secrets’ and my audiobook – Crypto Millionaire Kickstarter Guide’ in March 2020 as the recession I had been talking about in my previous book was about to kick in caused by Covid related mass lockdowns and business closures.

I wanted to give a clear path to people who were still oblivious to ‘financial tsunami’ which was about to come so they could take the necessary action to not only protect themselves but also to financially prosper at the same time. The response to the e-book and audiobook has been amazing with many people already having generated life changing wealth for themselves and their families.

Priyanca: When did you start a podcast and what do you talk about?

Gurmit: It began in 2014 as just me using cryptocurrency for my own investing purpose but after spending thousands of hours studying cryptocurrency, buying, holding and selling 97 different cryptocurrencies thousands of times, being hacked, stolen from, buying over 60 ‘craptocurrencies’ (I call them that because they were actually crap!) and the rest, it came to my attention that my own experience had positioned me as an expert in his field.

So at the beginning of 2017 I began educating private investors, many who were like myself from the property sector, on how to safely navigate the world of cryptocurrency using the same methods that I was using. Difference being I had to learn the hard way by making the mistakes, and they didn’t!

As well as being a keen student and investor of cryptocurrency I was also fascinated by financial cycles particularly after experiencing one first hand in 2008 – so much so that I wrote my first E-book – ‘Crypto Protection Secrets  – What Your Bank Doesn’t Want You To Know in 2019.’

In this I explained what it was the banks had been doing since the 2008 subprime mortgage crash – which was currency debasement, basically printing and creating money out of thin air and pumping it into the economy, and how this had been the reason for the collapse of every major civilisation going back to Greek and Roman times.

The difference was when the banks did it, they called it quantitative easing and got a big bonus at Christmas and if we did it they would call it counterfeiting and get a lengthy prison sentence.

I explained how and why crypto could protect us from the next financial crisis which was due anytime and that they should start buying crypto now. A financial crisis that I have been actively preparing for since 2015 and is here right now.

This has been my core message for many years way before the crypto-mania kicked in and I still stand by it. I am also very passionate about teaching the youth on what our money actually is and how to use cryptocurrency. Schools do not teach kids this and I feel that regardless if a child is going to leave school at the age of 16 and become a window cleaner or go onto higher education and become a barrister, every school kid should be taught in their last year of school for one hour a week what this thing called money is and how to use it.

If they don’t, then money will use them in the form of bad debt and poor saving and investment decisions. Kids leave school without real world applicable financial education and the mainstream schooling system for near enough a century has allowed this to happen.

I have also been very active on social media platforms such as Facebook, Instagram and Twitter for over a year now telling people to buy Bitcoin as it is very cheap – I have been doing this since it was £4,000. My message has remained the same, as it is today, which is that cryptocurrency at today’s prices is at give away prices and represents a wealth generating opportunity of lifetimes!

Priyanca: What are your key learnings that we too can benefit from in future.

Gurmit: I have a saying: Self education leads to self empowerment.

Take time to invest in your own knowledge. Do not dismiss the impact new technologies will have in the very near future.

Don’t sit on the fence — have a plan and execute it immediately and always seek guidance and/or mentoring of someone who has the experience to be able to save you years of making mistakes.