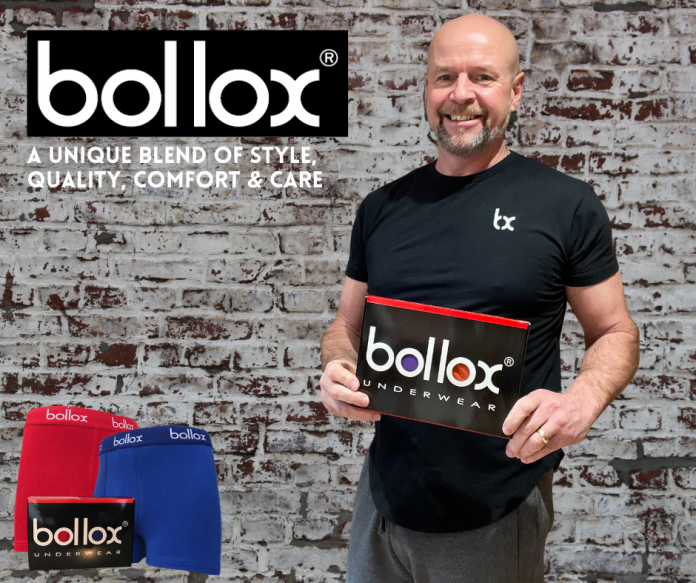 Some of the cancer charities Bollox supports include:

What was your inspiration behind the charity business and brand?

The inspiration came from the untimely death of my best friend of 32 years, Peter, who died at 40. Before his diagnosis at 38 years with secondary cancer, he had many symptoms for 2 years which he ignored and/or was too fearful to go to the doctor’s/hospital.

After his death I wanted a brand and business which would ultimately raise awareness of men’s cancers and men’s health — as awareness is our best initial defence in those early stages where survival is at its greatest.

I wanted a brand which would shock (not insult), remind us, draw attention, start a conversation and maybe create a smile. So Bollox was born, but also to have quality, credibility, comfort and style so it could become more than a pair of boxer shorts with a risqué name .

When things get tough with developing the brand, I think of Peter and the mental strength he mustered during his cancer journey —  that inspires me. It makes me realise I’m lucky to have life and to pursue challenges, so the journey continues to develop the brand and the cause in represents.

(As the brand grows, Elsley is able to bring in resources that allow him to grow the brand further and highlight how the response has been so far):

It’s always been a positive response in the main (despite the occasional ‘oh my, does that say bollox’). But my biggest hurdle was 100% believing in the brand myself — to become Mr Bollox, to live it and breath it, be proud and confident of the name and achievements to date.

What are some of your popular lines?

Currently we don’t have a huge range but developing more styles and colours this year. But our Mr Bollox characters, especially Mr Clever bollox and Mr Lazy bollox are especially popular. I started these as a bit of fun but they are great sellers.

What is the aim behind the Thumbs Up campaign?

I wanted to create a campaign and a following where guys from any background, be it short, plus size, White, Black, bald, young or old, could participate in. By giving the Thumbs Up picture to demonstrate they have checked themselves, they are health aware — maybe create a Bbollox Blub’ that says “Look… I’ve got a new pair of bollox” – type of thing. It’s early days but as the brand develops so will the Thumbs Up message

While COVID has has created more online sales in the past 12 months, Elsley tells us about the new products he continues to develop):

There are plenty of new styles (briefs, H style boxers and new colour-ways). I am also developing Mr Bollox characters and our new concept ‘Bollox & Sox’. Also further developing my BX brand (men’s athleisure) – as the fitter we guys are, the less likely we are to have cancers and improved mental health.

Elsley has also launched The Bollox Foundation – the charity arm of 4e products for Bollox and is develop his ‘talking bollox’ conversations to groups.

Find out more information on the website and see how you can support the charity here: https://www.mybollox.co.uk/pages/support