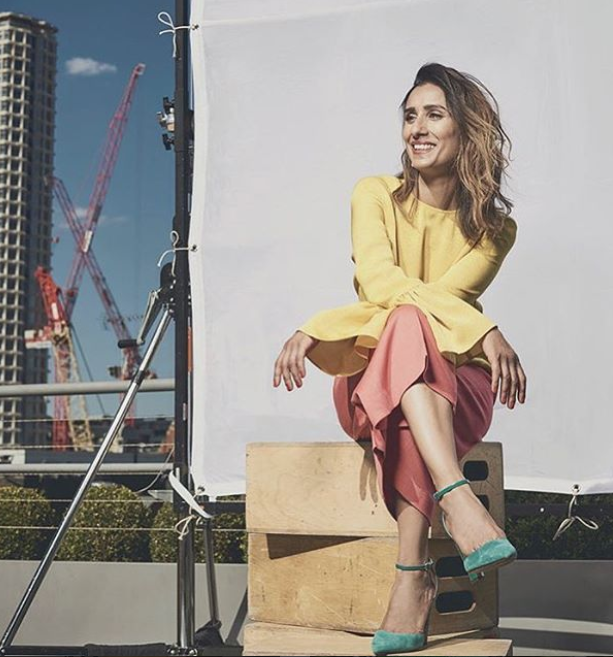 We caught up with presenter Anita Rani to talk about her upcoming documentary ‘Bollywood: The World’s Biggest Film Industry’, which will be airing Monday 8th August at 9pm on BBC Three. The 2-part documentary is a part of the upcoming BBC Big British Asian Summer, a season of programmes surrounding British Asian culture in the UK.

The Countryfile and Strictly Come Dancing star spoke to us about filming the documentary, being on the chaotic set of a Bollywood film and much more!

How did you get involved in the BBC’s ‘The Big British Asian Summer’?

I made a programme about Bollywood and it was put into the Big British Asian season.

Major announcement! I’ve made a programme I’ve been wanting to make forever, all about BOLLYWOOD! It’s coming to a TV screen near you this summer. A look into the World’s Biggest Film Industry and modern India. I think you’re going to love it @bbctwo #presenter #bollywood #BBC #dancing #bollywoodstars 🤩💃🏽

So, that’s how that came about. But it’s great that the BBC are doing a season to celebrate British Asianness and all its diversity. All the variety of programmes that are going to be on will give people a real kind of insight into where Britain and the Asian community are at right now and just how nuanced and varied and wonderful we are and some of our stories.

Fantastic evening launching the British Asian Summer @bbc on a TV screen near you this August. This fab floaty green number @lazullondon so many awesome telly programmes coming your way 📺 #presenter

Tell us about ‘Bollywood: The World’s Biggest Film Industry’?

It’s a two-part documentary for BBC Two. The first-part explains what Bollywood is for audiences who may not have any clue. We can’t just assume that just because the South Asian community know about it and love it that everyone else does so I’m going to explain what that is. And the second part should be really surprising for everybody, a real eye-opener about where the Indian film industry is now and what it says about modern India.

Finally my over expressive face can be put to good use…..can't wait for you to see what I've been up to today. #bollywood #mumbai #indian #bindi #sequins #travel #india #presenter #BBC

But I think people are going to have a great time. The programme itself reflects what Bollywood is so I’m having a great time, it should be very entertaining, and I get to have a dance as well. And I’m an extra in a couple of films!

Did you get to meet any amazing Bollywood stars?

I get to meet Kangana Ranaut, she’s pretty amazing, she’s quite badass, I’m a big fan of hers, I was really excited to meet her. And I’m on set with Anil Kapoor, with Ajay Devgn, which was brilliant because he’s doing a sort of action, fight-sequence. And I get to meet some of the best directors and choreographers in the industry now!

Were there any particularly memorable highlights?

Loads! I love going to India and know Bombay quite well. But everything from the chaos and brilliance of being on set, millions and millions of people when they film a dance sequence to understanding that the most important person is called the Spot Boy. And all you do to get him is somebody shouts “Spot!” and this guy comes running up and he will just bring you tea.

Dress down Monday. There's a very good and exciting reason for me to be filming a doc in short shorts and stilettos. Might make it my thing. #BBC #bollywood #presenter #travel #mumbai #india #fashion #shorts #break #lounging

Bollywood movies are fuelled on chai. We drank a lot of chai. And the other things that are really surprising that I think audience will enjoy is how many British white girls are dancing in Bollywood movies, and living in Bombay and earning a career as dancers and having a great time out there whilst they’re out there doing it.

What should audiences take away from the documentary?

It’s not for me to give a message. All I’m doing is shining a light on something, on a phenomenon that’s happening right now. I don’t know what people are going to think. Hopefully, they’ll really really enjoy it. Hopefully they’ll want to watch a Bollywood movie or two off the back of it. And hopefully it might change their perception about what India is.

It still is a deeply conservative society but at the same time it is a very progressive, forward-thinking, modern place as well. There’s a very cosmopolitan generation. So there’s all that going on also!

Which other programmes are you looking forward to in the season?

Also, the one that traces family history. I’m really interested in history so there’s loads. Bobby Friction’s ‘Pump Up The Bhangra: The Sound Of Asian Britain’ on BBC 4. I can’t wait to see that!

Catch the first part of Bollywood: The World’s Biggest Film Industry on Monday 13th August and the second the following week on Monday 23rd both at 9pm BBC Two!