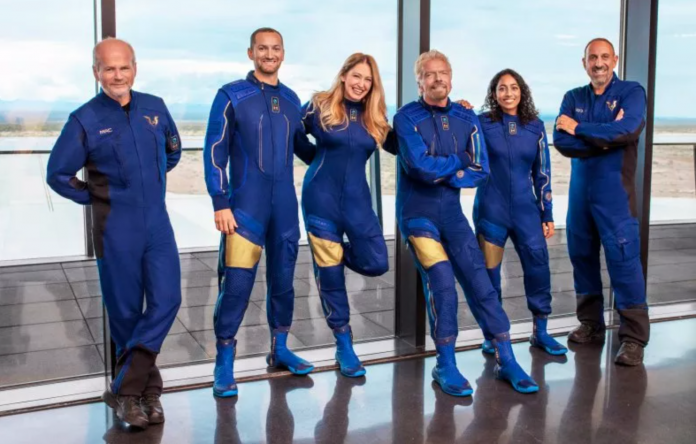 The UK entrepreneur flew high above New Mexico in the US in the space craft that his company, Virgin has been developing for 17 years.

The trip was, he said, the “experience of a lifetime”.

He returned safely to Earth just over an hour after lift off.

“I have dreamt of this moment since I was a kid, but honestly nothing can prepare you for the view of Earth from space,” he said in a press conference following the flight. “The whole thing was just magical.”

The trip also makes him the first of the new space tourism pioneers to try out their own vehicles, beating Amazon’s Jeff Bezos and SpaceX’s Elon Musk.

Shortly after the flight, Branson tweeted “Welcome to the dawn of a new space age,” along with a picture of himself in zero gravity.

Welcome to the dawn of a new space age #Unity22 @virgingalactic pic.twitter.com/Rlim1UGMkx

Branson is the first of the competing “billionaire space barons” who now officially qualifies as an astronaut in the US.

Sir Richard billed the flight as a test of the space tourism experience he expects to begin selling to customers from next year.

I have dreamt about this moment since I was a child, but going to space was more magical than I ever imagined https://t.co/Wyzj0nOBgX #Unity22 @virgingalactic pic.twitter.com/grs7vHAzca

Also among the five passengers aboard the flight, was 34-year-old scientist Sirisha Bandla, Virgin Galactic’s vice president of government affairs and research.

She spoke out about a ‘lack of diversity’ in the space industries—and space itself—in the months leading up to the flight.

“Women and people of colour you don’t often see…I don’t often see students that look like myself in this industry just yet,” Bandla said in a September 2020 interview with Matthew Isakowitz Fellowship, a programme helping college students into the commercial spaceflight industry.

Historically, most astronauts have been white, male, and military. Bandla hopes to affect diverse changes in space agencies.