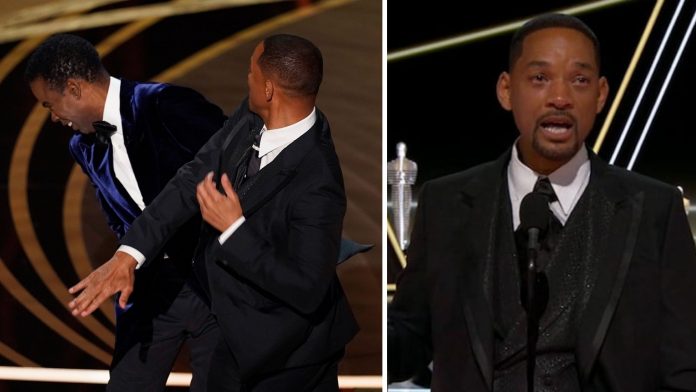 Will Smith’s physical altercation with Chris Rock has dominated international headlines after he slapped the comedian for taking a jab at his wife, Jada Pinkett Smith.

While conflicts in Ukraine continue to permeate global news stories, headlines were rife with reactions to actor Will Smith’s seemingly disproportionate response to Chris Rock’s unwelcome joke about Jada Pinkett Smith during the OSCARs on 28 March.

In the UK, The Telegraph‘s critic Robbie Collin said Smith’s act is “the most shameful and unforgivable Oscar moment ever”. Adding, “He’s wrecked the biggest night of his career.”

The Guardian called the evening “a historic night for women – overshadowed by male violence.” The paper’s Catherine Shoard asked whether Will Smith’s personal history may in some part explain him lashing out. The writer points out how Smith has written publicly about his need to compensate for a childhood marred by domestic violence. Shoard also points to previous occasions when Rock has poked fun at Jada Pinkett-Smith.

But Reid responded: “I honestly think at the moment there’s quite a lot of justifying of someone who just hit someone else on television and just remember, apart from the fact it’s not OK to hit somebody, what is that saying to people watching.”

The Prime Minister’s official spokesman said he had not spoken to Boris Johnson about the matter as the PM had been “speaking to leaders on Ukraine”, but added: “On this, I think the Education Secretary was entirely right this morning – obviously striking someone is never the answer.”

Secretary of State for Education, Nadhim Zahawi had earlier told LBC: “Violence is never the answer to any problem-solving, as Will Smith admitted himself in that tearful, heart-wrenching apology.”

Rock, who was presenting an award, appeared to have made an on-stage joke about Pinket Smith’s hair loss, which is due to alopecia, saying: “Jada, can’t wait for G.I Jane 2!”

Smith then walked up on stage and struck Rock before returning to his seat to shout: “Keep my wife’s name out of your f***ing mouth.”

Smith later apologised in a tearful best actor acceptance speech, claiming: “Love will make you do crazy things”. He also revealed what Denzel Washington counselled, “At your highest, that’s when the devil comes for you,” in response to his outburst.

Following the ceremony, Smith proceeded to celebrate his Best Actor win for his performance in King Richard – when videos emerged of the star dancing to ‘Gettin’ Jiggy With It’ at the Vanity Fair Oscars After Party.