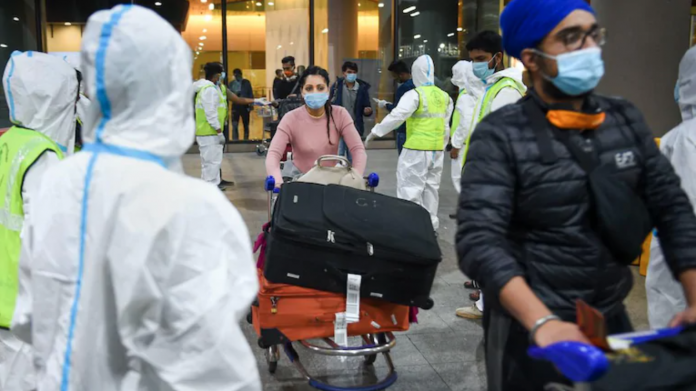 Pressure to put India on the government’s ‘red list’ is mounting — following concerns of the new variant featuring mutations said to ‘evade immunity’.

After last week’s news emerged of the Indian variant detected in the UK — which features two mutations that could evade ‘some antibodies’ — fears have mounted across the UK, and the government has faced calls to add India to its ‘red list’.

However, there is currently “no evidence” the Indian COVID variant can evade vaccines, Environment Secretary George Eustice has said, despite the mounting pressure.

The UK has recorded 77 cases of the “double mutant” variant, which is currently being reviewed by British scientists.

The environment secretary told Sky’s Sophy Ridge On Sunday that although it is “a fairly small number at the moment – it is something that we are watching”.

He added: “I’m told there is no evidence at the moment this particular variant is able to get around the vaccine or… that it is necessarily more contagious than the others – but we are looking at it, it will be studied.”

His comments came a day after a professor of immunology warned the UK should be on its guard, against a third wave of coronavirus after the 77 cases of the B.1.617 variant were detected.

In his interview, he told Sophy Ridge: “We’ve got some of the best genomic studies available in this country, we are very good at genome sequencing for different variants and that work is ongoing.”

However, he did point to a “wider concern”.

“The biggest threat to everything we’re doing at the moment is that at some point there will be a variant that manages to evade the vaccine or largely evade it, so it is high on our concerns which is why while the vaccine rollout has been incredibly successful with over 60% of the adult population now vaccinated, we continue to proceed with some caution as we come out of lockdown,” he said.

Meanwhile, health officials are looking into whether the new Indian strain is more tranmissable and can evade immunity.

There is not yet enough data to classify it as a “variant of concern”, a leading scientist has said.

But Dr Susan Hopkins of Public Health England said some cases had been found in the UK that were not linked to travel, with their origin now being investigated.