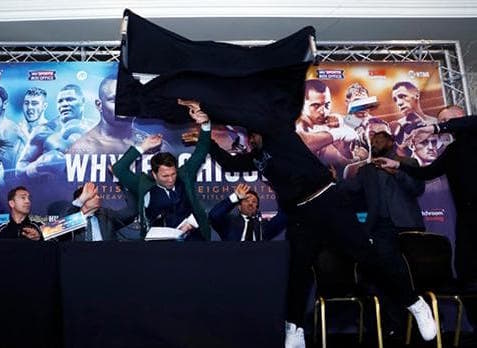 The Dereck Chisora and Dillian Whyte fiasco continues when Chisora decided to launch a table at Whyte at the end of a pre-fight press conference.

It was initially thought the two would have separate press conferences but it was decided they should sit at the same table with heavy security presence. The two boxers exchanged strong words at a Manchester hotel where the conference was being held. In-turn Chisora lost his temper, banged the desk with his fist and launched the table at Whyte which resulted in a scuffle with both camps and security being involved.

The boxers are scheduled to fight this Saturday in Manchester for the WBC British Heavyweight Championship. The two have previously been involved in scraps on ‘The Gloves Are Off’. Who will win? Let us know your thoughts #BritAsiaTV