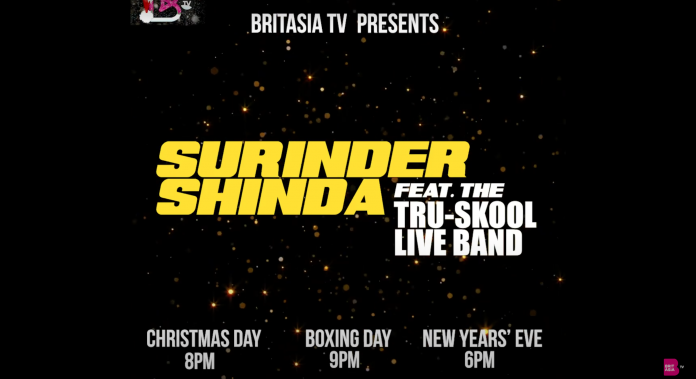 This Christmas and New Year’s Eve, in a gift that promises to keep on giving, see Punjabi folk singing superstar Surinder Shinda on stage with Tru-Skool and his live band.

The event which took place at Hippodrome, Birmingham on 8 February 2020 was a cherished experience, as it was after 15 years Shinda came to the UK to perform in a concert setting to such acclamation.

Performing alongside the Tru-Skool live band, catch Surinder Shinda showcasing his greatest hits including Puth Jattan De, Jeona Maurh and Sassi, as heard in their original form alongside a collection of his biggest UK produced records.

Tru-Skool provided performances helmed by the renowned Sukhi Aulakh and the band showcased their talents with instantly recognisable music from notable albums. And in what was the biggest surprise of the evening, the internationally esteemed artist, Panjabi MC joined Shinda on stage to perform the iconic Mirza — a collaboration by the two released some two decades ago.

Speaking at the time of the event, Tru-Skool said: “Artists like Surinder Shinda, Kuldip Manak and Charanjit Ahuja have had the biggest impact on Panjabi music in all of its history- the material they produced in the EMI/HMV era represents the essence of Panjabi music and culture and is not only the foundation, but also a master class of how it’s supposed to sound and be presented.

“To have Surinder Shinda for one night only performing his evergreen music from the golden era is something special. BritAsia TV have taken a massive step by organising an event to this scale/standard as their aim is to create balance within the scene – where the audience can now experience real traditional music as well as today’s commercial sounds.

“Our aim as a band is to deliver a performance that showcases Surinder Shinda’s classics as accurately as possible to the highest standard achievable. If you are a fan of Panjabi music, then this is one show you do not want to miss.”

Tony Shergill, CEO of BritAsia TV, added: “We are proud to be working with the iconic Birmingham Hippodrome for this event. Following the success of our previous award shows in London, it was important to bring a BritAsia TV event back to Birmingham.

It is great to be able to celebrate a living legend of Panjabi folk music, at an equally iconic venue. Many artists have grown up listening to Surinder Shinda, and so it is very exciting to commemorate all that he has done for the Panjabi music industry.”

Check out our teaser ahead of the full programme broadcasting Christmas Day at 8PM on BritAsia TV.