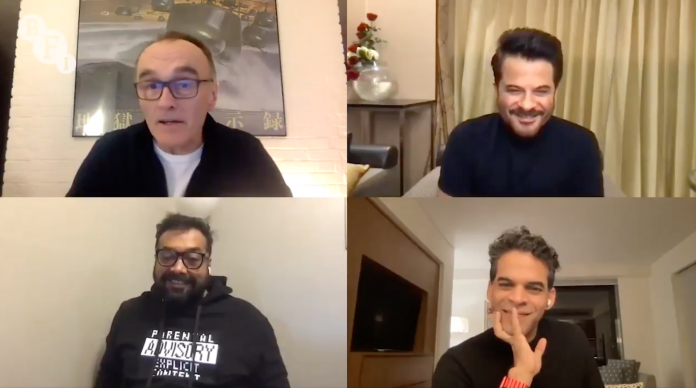 Oscar-winning filmmaker Danny Boyle has lauded Netflix’s AK vs AK, which stars Anurag Kashyap and Anil Kapoor and directed by Vikramaditya Motwane during a virtual Q&A session hosted by BFI.

The film AK vs AK a dark comedy which exposes a public spat with a movie star (Kapoor), a disgraced director (Kashyap) retaliates by kidnapping the actor’s daughter, filming the search for her in real time.

In the special Q&A session hosted by BFI At Home, Danny said: “I just wanted to convey to you what a wonderful film you’ve made. I was astonished by it… For me, it joins the pantheons of great films about filmmaking, of which there are a number.

“My favourite are Day For Night (La Nuit américaine) and probably Coppola’s wife’s film, Heart of Darkness. Now, the only film to deserve a Nobel Prize). But this is an incredibly modern film about filmmaking and there aren’t that many of them.”

During the conversation, Vikramaditya talked about the film and how the script came into fruition. Danny Boyle was impressed by Harshvardhan Kapoor and was even surprised to see Sonam Kapoor being part of them while she herself is a star.

Boyle further praised Kapoor’s performance and said: “Anil, it’s an exhilarating film. A success on all levels. A wonderful idea which in other hands might quickly run out of steam, here it sustains magnificently.

“Intriguing – I didn’t spot the twist, excruciating – the way reputations and egos are trashed, exciting – it has real breathless propulsion, visceral – the car smashing into you is brilliantly done, and it is truly, truly funny. It shamelessly uses every trick in the book to tear apart the film industry and modern media.”

Taking to social media, Kapoor shared a snippet of the Q&A in session and expressed his gratitude for Boyle’s time and support for the film. He tweeted: “Very grateful to the incredible Danny for being so generous with his valuable time and for showing his support for the film. We are thrilled that you liked the film enough to watch it (twice!) and to moderate such an insightful panel on the BFI platform.”

Very grateful to the incredible Danny for being so generous with his valuable time and for showing his support for the film. We are thrilled that you liked the film enough to watch it (twice!) and to moderate such an insightful panel on the BFI platform. pic.twitter.com/NyDk3Mcvlx

Watch the official trailer for AK vs AK here: