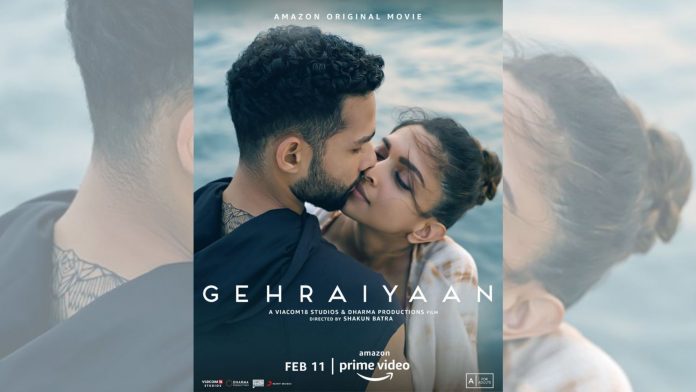 Deepika Padukone took to social media to share the official posters for Gehraiyaan on her 36th Birthday (5 January, 2022) as a treat for her fans.

Directed by Shakun Batra, the long-awaited film takes a look beneath the surface of complex modern relationships, adulting, letting go and taking control.

The newly released posters include captivating individual character posters for the lead cast, a heart-warming poster featuring Padukone and Siddhant Chaturvedi and an ensemble poster with the lead cast.

The posters tease the audience with what to expect from the film — exposing private messages between the couples as part of the poster to underscore the relation drama.

The posters were first shared by Padukone on social media who dedicated the unveiling to her fans, alongside the caption: “A little birthday present for all the love you have showered us with!”.

Alongside Padukone, the film also features Chaturvedi and Ananya Panday in the lead along with Dhairya Karwa, Naseeruddin Shah and Rajat Kapur in pivotal roles. The film is jointly produced by Dharma Productions, Viacom18 and Shakun Batra’s Jouska Films.

Gehraiyaan to set to have its world premiere on Amazon Prime Video across more than 240 countries and territories on 11 February, 2022.