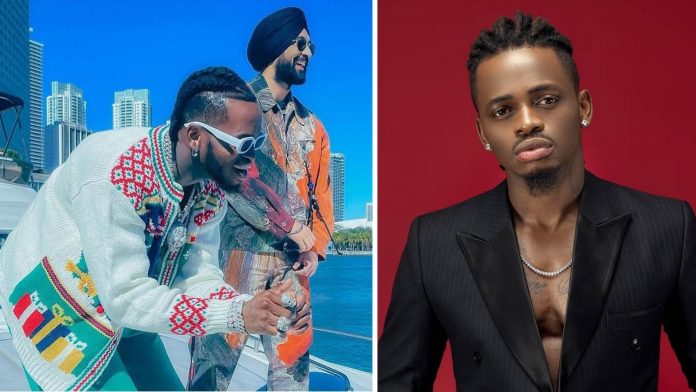 In the picture shared by Dosanjh on social media, the Punjabi singer can be seen sporting a vibrant two-piece co-ord alongside the Tanzanian musician on a yacht in Miami, as they laugh into the distance.

Sharing the picture on Twitter on Sunday (30 January), Dosanjh captioned the post, “Brother […] @diamondplatnumz […] What A Smooth SILK Voice He Has Man #Music #Sound.”

What A Smooth SILK Voice He Has Man#Music #Sound ✊🏾 pic.twitter.com/zzNaGpaaDQ

Diamond Platnumz, otherwise dubbed ‘The Rolls Royce Musician From Africa’, is a Tanzanian bongo flava recording artist, dancer, philanthropist and a businessman of Ha heritage and has a following of 14m on Instagram.

The picture shared by Dosanjh hints at a collaboration between the two; but until further updates are announced, fans can look forward to the artist’s upcoming EP, Drive Thru, which Dosanjh confirmed last week on social media.

Having shared BTS snaps of his music video for Drive Thru last week (26 January) to announce the EP, the Champagne singer followed up the next day with more BTS snaps from the shoot – only this time in front of a green screen.

Dosanjh is yet to confirm when Drive Thru will be released.

On the film front, Dosanjh will next be seen in the recently announced Punjabi comedy Babe Bhangra Paunde Ne, set to release worldwide this Dussehra on 30 September, 2022.