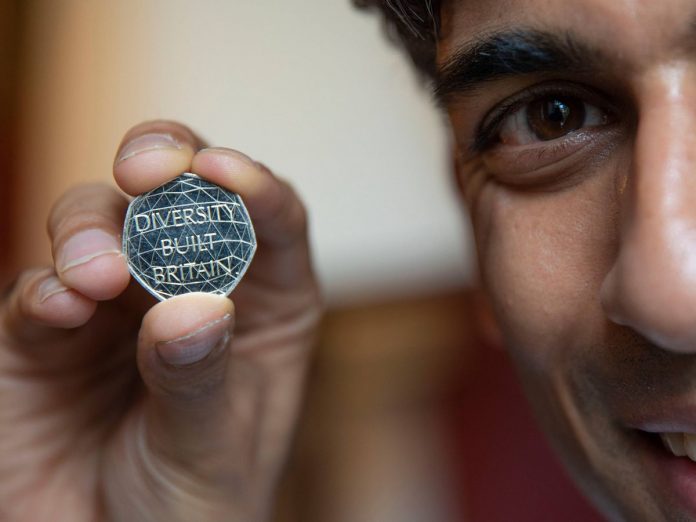 A new 50p coin to mark the contribution of minority communities’ shared history of the United Kingdom has entered circulation this week.

The coins signal the intent of the Royal Mint and Chancellor Rishi Sunak to include a wider range of people on coins and notes in the future, according to the Treasury.

Around two-and-a-half million coins were released into circulation on Monday.

The coins features the words “Diversity built Britain” and a geodome, representing connection and strength.

Their design was created by Dominique Evans, who has previously designed coins to mark VE Day, the Sapphire Coronation and Jane Austen. It was inspired by Ms Evans’ own personal experience growing up as a mixed-race woman.

Mr Sunak commissioned the coins earlier this year following discussion with the We Too Built Britain campaign, which works for fair representation of minority communities’ contributions across all walks of life.

Sunak said: “I have seen first-hand the contribution made by ethnic minority communities to Britain’s history. That is why I backed the We Too Built Britain campaign and requested that the Royal Mint introduced this coin to celebrate it.

“This coin, and the rest of the series, will act as a fitting tribute to the very profound impact ethnic minority communities have made on Britain, and I am grateful to the Royal Mint for turning this around at record speed.”

Ms Evans said: “When designing this coin, I began by thinking about the people who inspire me and what diversity has meant in my life. I believe that no matter where you are born, we all belong under the same sky and this was the starting point of the design.

“The background of the coin features a geodome with a series of interconnecting lines and triangles that form a network. Each part is equal, and symbolises a community of connection and strength.”

The campaign has also been given a platform on social media, where the growing network can express their views and support via Twitter. Their pinned tweet outlines the campaign’s following key proposals:

Tomorrow, the Speaker's Advisory Committee on Works of Art assesses the We Too Built Britain proposal, supported by more than 60 cross party politicians, to have an artwork in Parliament to honour NHS and key workers. pic.twitter.com/oSOaGkuTpr

Discover more about the ‘Works of Art’ campaign here.