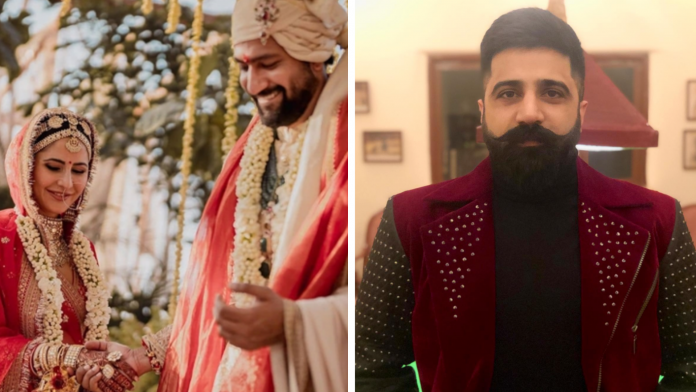 Exclusive details surrounding Katrina Kaif and Vicky Kaushal’s wedding have revealed DJ Frenzy performed for the Bollywood couple at a venue in Rajasthan.

Katrina Kaif and Vicky Kaushal tied the knot on Thursday (9 December) at a grand wedding held in Rajasthan’s Six Senses, Fort Barwara in front of 120 guests.

The couple shared the first pictures from their elusive wedding on Instagram, making it official to the world.

Taking to Facebook to tease his grand gig ahead of the wedding, the DJ posted a picture of himself and geo-tagged Jaipur as his location alongside the caption, “You’ve got to do it more than once, to show them it wasn’t luck.” […] Looking forward to performing here in Jaipur for a big phat Indian wedding. I’ll let you guess whose… […] Time to go offline.”

During wedding week, DJ Frenzy later posted a picture on Instagram of the newly-weds to congratulate the couple together with a note to his family about keeping the gig a secret.

He captioned the post, ” Congratulations @vickykaushal09 & @katrinakaif ❤️ […] Thank you for inviting me to perform at your wedding celebrations! Wishing you all the best for the future 🙏🏼.

He continued, “Apologies to my family and close friends – it was so hard to keep this a secret, but finally, “the Kat is out of the bag” 😄.”

According to Wedding Sutra, the newly restored 700-year old Fort Resort is said to have luxurious suites starting from Rs.75000 a day. It welcomed Katrina and Vicky’s glorious revelries, orchestrated by Katrina’s trusted manager Reshma Shetty and planned by a sought-after team of celebrity wedding vendors that included Wedding Planners Shaadi Squad and Wedding Decorators Rani Pink amongst others.