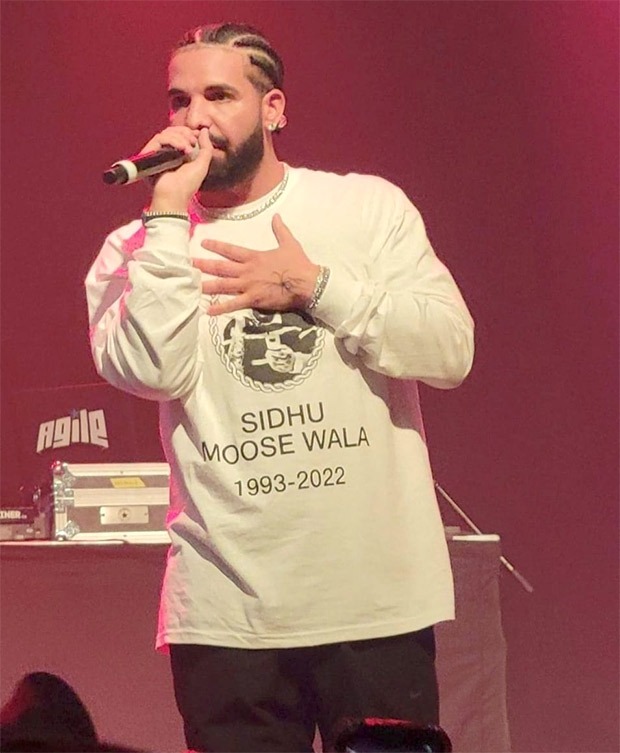 Back in May 2022, popular Punjabi singer and rapper Sidhu Moose Wala was shot dead. The incident allegedly took place in Jawaharke village of Mansa district on Sunday, May 29. His untimely death has left the nation in shock with fans, netizens and political leaders demanding investigation in the murder of the rapper. Amidst this, celebrities, fans have been remembering the rapper in their ways and paying tribute. Rapper Drake has once again paid tribute to the late singer-rapper.

The Canadian rapper, who is currently on tour, was seen donning a T-shirt with Sidhu Moose Wala’s picture on it. He was performing at Toronto in Canada pm July 28. Today marks two months since the young musician passed away.

Back in May, Drake had taken to his social media handle to offer condolences after the untimely death of Sidhu Moose Wala. He took to his Instagram Story to share a photo of Sidhu sitting next to his mother and wrote, “RIP Moose.” He also added a bird emoji. The rapper also followed the Indian musician on Instagram.

Sidhu Moose Wala shot to fame in 2017 with his track ‘So High’. He is regarded as one of the most popular independent rappers. He made several hits including ‘Legend’, ‘Devil’, ‘Just listen’, ‘Tibeyan da putt’, ‘Jatt da muqabala’, ‘Brown Boys’ and ‘Hathyar’ among others. His last track was ‘The Last Ride’. Ever since his death, several tracks of the rapper have once again picked up streams on the music platforms and trending charts.