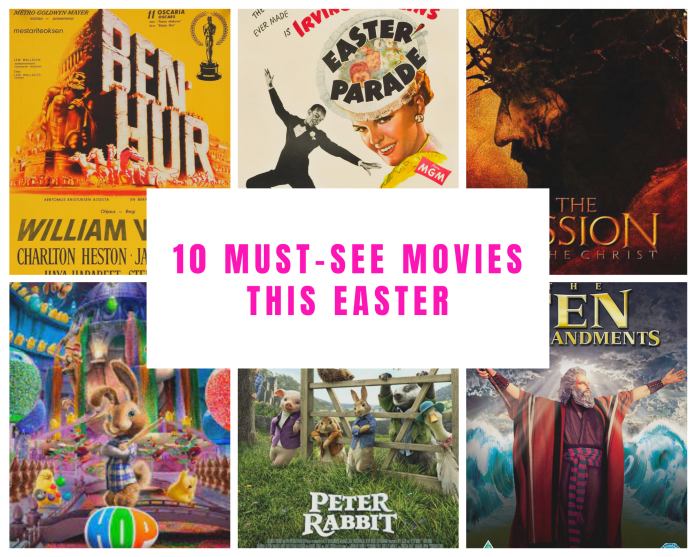 From biblical epics to fun-for-the-family films, there’s a basket full of must-see movies that promises to educate and entertain this Easter bank holiday.

Put on your Easter bonnets and choose your favourite chocolate eggs, and treat yourself to some cinematic entertainment from the comfort of your home, with these must-see movies.

The Last Temptation of Christ: Martin Scorsese directs Willem Dafoe in this intense portrayal of the life of Jesus Christ; beset by his trials and tribulations, and his final temptation on the cross.

The Greatest Story Ever Told: From his birth in Bethlehem to his death and eventual resurrection, the life of Jesus Christ (Max von Sydow) is given stellar treatment in this epic retelling – also starring John Wayne, Charlton Heston, Sidney Poitier and Shelley Winters.

Ben-Hur: In this remake of the 1925 silent film, nobleman Judah, (Charlton Heston), portrays a Palestinian Jew who is battling the Roman empire at the time of Christ. His actions thrust him and his family into slavery, but a serendipity with Jesus changes everything. Heston finally meets his rival in the iconic chariot race across Circus Maximus and rescues his anguished family.

The Ten Commandments: Moses (Charlton Heston), plays an Egyptian Prince who learns of his true heritage as a Hebrew and his divine mission as the deliverer of his people. With the aid of plagues and divine intervention, he manages to lead them out of Egypt and across the Red Sea but takes an unforgettable visitation by God on Mount Sinai for Moses’ mission to prevail.

The Passion of the Christ: In this version of Christ’s crucifixion, based on the New Testament, Judas expedites the downfall of Jesus (Jim Caviezel) by handing him over to the Roman Empire’s handpicked officials. To the horror of his mother, Mary (Maia Morgenstern), Magdalen (Monica Bellucci), whom he saved from damnation, and his disciples, Jesus is condemned to death, but not before a last act of grace.

Hop: An out-of-work nonchalant becomes burdened after he runs over E.B., the Easter Bunny and has to assume the rabbit’s duties in order that the holiday can continue.

Rise of the Guardians: A magical story about childhood’s legendary guardians – Jack Frost (Chris Pine), the Easter Bunny (Hugh Jackman), Santa Claus, and the Tooth Fairy, together for the first time! When the evil boogeyman Pitch (Jude Law) threatens to take over the world, it’s up to our guardians to protect the hopes and dreams of all children (and adults alike).

Prince of Egypt: Based on the Book of Exodus, two brothers named Moses and Rameses grow up to become the best of friends. But when one becomes a ruler and the other, deliverer of his people, their relationship is embittered.

Easter Parade: When Broadway star Don Hewes’ (Fred Astaire) dancing partner (Ann Miller) goes solo, Don declares he will make a success out of the next dancer he sees. He stumbles on inexperienced Hannah (Judy Garland), who bristles as Don tries to transform her into his old partner. But when he starts falling for Hannah, Don learns he must let it go, to let her grow into her full potential.