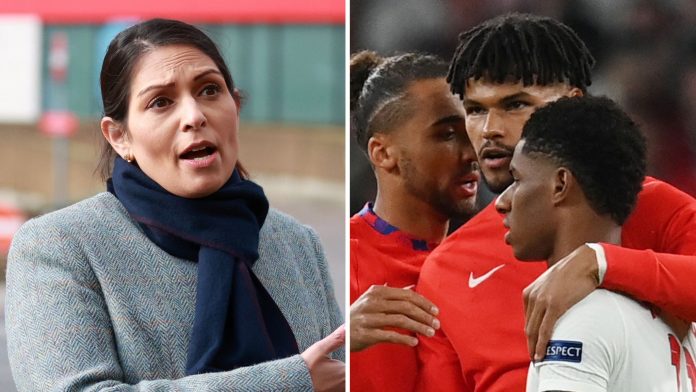 Footballer Tyrone Mings has criticised Priti Patel for pretending to be disgusted by racist abuse, having previously described taking the knee as “gesture politics”.

Marcus Rashford, Bukayo Saka and Jadon Sancho were racially targeted after they missed penalties in the Euro 2020 final on Sunday.

Priti Patel said she was “disgusted” by the online abuse directed at the trio.

On Twitter, Mings said she had “stoked the fire” by refusing to criticise fans who booed the England team for taking the knee.

You don’t get to stoke the fire at the beginning of the tournament by labelling our anti-racism message as ‘Gesture Politics’ & then pretend to be disgusted when the very thing we’re campaigning against, happens. https://t.co/fdTKHsxTB2

Ms Patel declined to comment on his tweet, but Downing Street said the home secretary was “working every day to clamp down on hate crime, racism and violence”.

The England player and member of the Euros squad was angered by a perceived lack of action by the government when some fans booed the players taking the knee before the tournament.

The act of taking the knee has become symbolic in sport and during anti-racist protests in recent years, and England players have been adopting the stance at the start of their matches.

Speaking to GB News about the England players’ protest in June, Home Secretary Priti Patel said she did not support “people participating in that type of gesture politics”.

Asked if she would criticise fans who booed England players taking the knee she said: “That’s a choice for them, quite frankly”.

Defending the home secretary, Downing Street added: “There is no place for racism in this country and she is backing the police to hold those responsible for this abuse accountable.”

Writing on Twitter on 12 July, Prime Minister Boris Johnson said the England team deserve to be “lauded as heroes, not racially abused on social media.”

This England team deserve to be lauded as heroes, not racially abused on social media.

Those responsible for this appalling abuse should be ashamed of themselves.

Mr Johnson is also due to hold a meeting with social media companies including Facebook, Instagram, TikTok, Twitter and Snapchat this week to discuss online abuse.