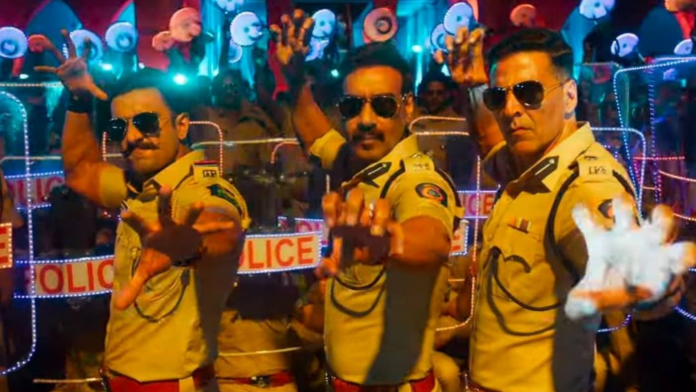 The release of the song Aila re Aillaa featuring Singham, Simmba and Sooryavanshi breaks the record for being the most viewed Hindi Bollywood song under 24 hours with over 33 millions views thus far.

The song establishes the ambience for festivities and unites all three cops; Ajay Devgn, Akshay Kumar and Ranveer Singh in police uniforms. It’s been some time since the much-anticipated wait for this frenetic performance and the crowd is showering love from all across the country.

Taking to social media, Ajay Devgn, Akshay Kumar and Ranveer Singh updated fans on the release of the song. Sharing a clip on Twitter, actor Akshay wrote, “It’s nothing short of a celebration when Sooryavanshi, Singham and Simmba come together.”

This is the fourth film in Rohit Shetty’s Cop Universe after blockbusters: Singham, Singham Returns and Simba and will also feature Katrina Kaif.

Sooryavanshi is presented by Reliance Entertainment and produced by Rohit Shetty Picturez in association with Dharma Productions and Cape of Good Films and is set to release in cinemas this Diwali.