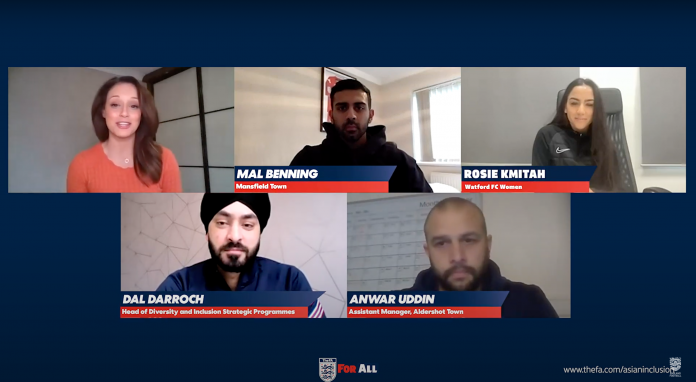 The Football Association (The FA) has provided an update on its Asian inclusion strategy — aimed at increasing Asian participation in football across the country.

The second phase of Bringing Opportunities to Communities launched in April 2019, focusing on ensuring more people from Asian communities play a bigger part in English football. Asian communities comprise the largest ethnic minority group in the UK and within grassroots football, male and female Asian participation [aged 16+] is now at 10.7% and 13.5% respectively. However, the number of professional players of Asian heritage is significantly lower, meaning tackling Asian underrepresentation at all levels of the game remains a key priority for The FA.

The strategy report, which can be viewed here, highlights progress being made across five pillars:

Dal Darroch, The FA’s Head of Diversity & Inclusion Strategic Programmes, said: “We know that Asian communities are the most under-represented ethnic minority group in many areas of the game, and The FA is passionate about and dedicated to ensuring our game is for all. We’re proud of the progress made so far, but there is more to be done and we will continue to work closely with Asian communities and our stakeholders so that we can strive to make our game truly inclusive.”

The FA also recently launched a central jobs platform as part of its commitment to the Football Leadership Diversity Code. The purpose of the platform is to create greater access to roles available across English football, and to help organisations and clubs reach more diverse candidates. Any signatory or club can advertise appropriate vacancies on the platform, which can be found here.

With the transparency and visibility of roles across English football identified as a key issue during the development of the Football Leadership Diversity Code, all signatories agree to advertise appropriate roles centrally to help reach a broader audience and attract more candidates from both within and outside of the game.