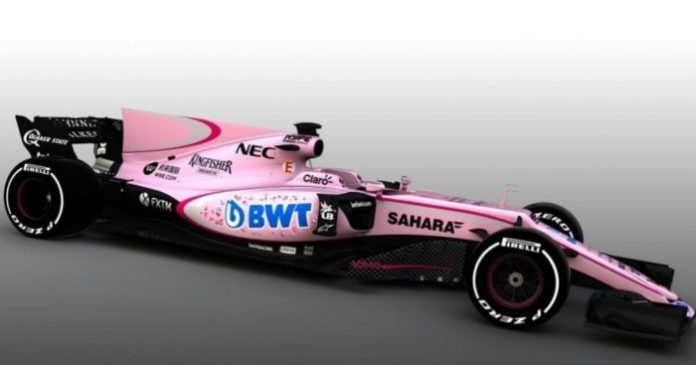 Earlier this week, Formula One team Force India revealed they will be racing in pink this season.

The change in livery comes as a result of the team partnering with Austrian-based water technology specialists, BWT.

Force India have gone from strength to strength in the past few seasons; finishing fourth in the constructor’s championship last year.

Force India’s co-owner Vijay Mallya said, “The arrival of BWT in Formula One is huge news and represents one of the most significant partnerships in our ten-year history…It’s a sign of how far we have come as a team with our strong results and completes a solid commercial performance over the winter.”

Formula One teams have faced criticism in previous years in regards to there being too many black and silver colour schemes, making it hard for spectators to identify the different teams.  By racing in pink, Force India will definitely stand out from the crowd.

The team released the following statement; “For 2017 our cars will sport a vibrant new colour scheme with a smart matte finish. Changing the colour of our cars is an indication of the strength of this new partnership and a real statement of intent from BWT as they begin their relationship with the sport of Formula One.”

Fans seemed to have embraced the radical change in colour, along with the news of Esteban Ocon joining Sergio Perez to make up the team drivers. However, some F1 teams have poked fun at the unexpected colour change on twitter…

We don't think we can be seen together anymore… pic.twitter.com/x1eeeIdTwH

Force India are set to debut their new colours at the first race of the season, on March 26th in Melbourne.

What do you think of Force India going pink? Let us know your thoughts at #BritAsiaTV